A Chinese Buddhist temple in Amsterdam 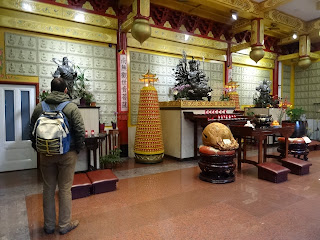 Not your usual Amsterdam interior! 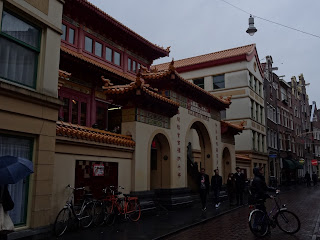 The He Hua Temple is Europe's largest Buddhist temple!


While walking around Amsterdam one evening, I noticed that some street signs that were in Chinese and pointed it out to my German friend who, like me, couldn't believe her eyes at first.  Soon though, it dawned on us, that we had inadvertently found ourselves in Amsterdam's Chinatown!


Despite only having come into being in the 1980s, this section of the Dutch capital city does have a distinctive feel to it.  And along with such as Chinese eateries (where my German friend couldn't resist getting an egg tart to eat for the first time since she was last in Hong Kong close to two years ago now) and shops selling Hello Kitty items (something that's on the rare side in Europe), we came across a Chinese Buddhist temple which looked like it had come out of a Hollywood movie!


The next day, my German friend and I returned to the area -- along with another friend (this one from the USA!) whom I had arranged to meet up with in Amsterdam -- and decided to take a look inside what my German friend's guidebook had said was the oldest Chinese Buddhist temple in Europe (but which we then surprised to find only dates back to 2000!).


The Fo Guang Shan He Hua Temple (AKA He Hua Temple) also is supposed to be the largest Chinese Buddhist temple in Europe.  And although it's not all that large compared to such as, say, the Kek Lok Si Temple in Penang or Japan's Horyuji, it is at least comparable in size to many of the Buddhist and Taoist temples to be found in Hong Kong (such as, say, Tai Hang's Lin Fa Kung or the Lo Pan Temple in Kennedy Town).


I had initially wondered if this Amsterdam Chinatown landmark was more of a tourist attraction than an actual place of worship.  But upon entering the He Hua Temple, I did get the sense that it has a genuine religious function and would not be surprised to find that it serves more regular worshippers than many of the churches which dot the Amsterdam landscape.

Unusually, pride of place at this temple goes to a statue of Kwan Yin (the Goddess of Mercy) rather than Buddha, and that the particular incarnation of Kwan Yin depicted is one with multiple hands (rather than the more usual pair).  Also notable is that the He Hua Temple was designed by a Dutch architect (Fred Greven) rather than, say, an architect from Taiwan, where the Fo Guang Shan order of Buddhism is headquartered -- but rather go for a decidedly Dutch design, he had gone to the other extreme and opted for a Chinese style that had struck me as quite fanciful! ;b
Posted by YTSL at 11:56 PM

Isn't that a nice surprise?

It definitely was a surprise to see Chinese road signs and letters appear on Dutch buildings. As for the Chinese Buddhist temple: honestly, I wouldn't have been surprised to have found out that it was something like Hollywood's Mann's Chinese Theater! ;b

When I looked at the photos before reading your entry I thought it was a place like Hollywood's Mann's Chinese Theater.

Aaah, glad to know I wasn't the only one who had that reaction! :)