Although I did manage to venture to other parts of the Netherlands beyond just Amsterdam and Schipol Airport on my recent visit to the country, I only glimpsed its countryside from aboard trains moving between cities and towns.  Thanks to a visit to De Hortus Botanicus Amsterdam, however, I did manage to spend some time appreciating natural sights on thjs recent European trip.

Actually, on our way to this treasure trove of a botanical garden, my American friend and I had spotted some wild winged creatures, including the kind of herons who don't look too different from ones I've seen in Hong Kong and Japan, in the vicinity!  And while we're on the subject of birds: the flocks of seagulls in many different parts of Amsterdam, including the Museumplein, served as a constant reminder that Amsterdam is a former fishing village that grew over the centuries into a major port-city... 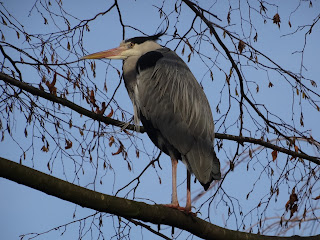 Not the kind of large wild bird you expect to catch sight of
perched on a tree in a major world city, right?! 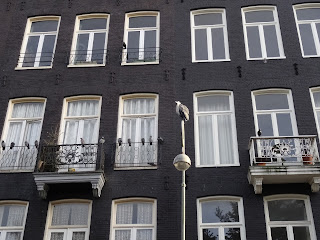 Can you tell which of the birds in the above photo
are real and which are not? ;b 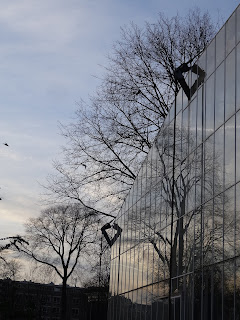 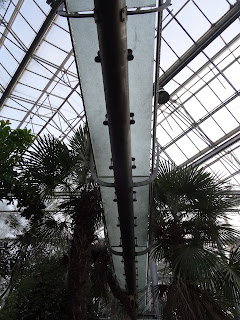 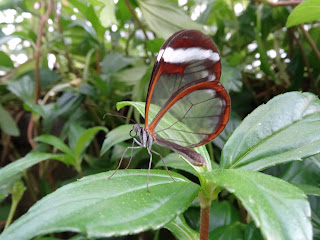 Upon approaching the Hortus Botanicus' Butterfly Greenhouse,
I could scarcely believe my eyes upon catching sight of
the South American Glasswing Butterfly! :O 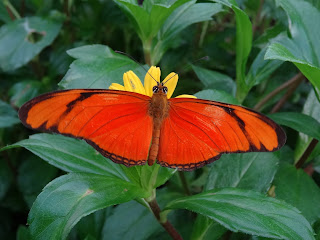 Their flitting can frustrate when you try to photograph them
but it's really hard to not find butterflies attractive, right? :) 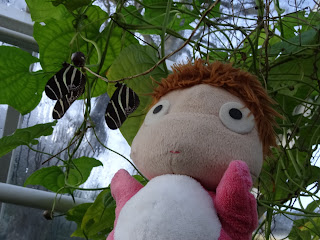 Puppet Ponyo looked enchanted, perhaps even ecstatic,
upon being able to get up so close to a group of butterflies :) 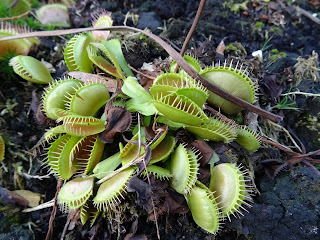 On the other hand, no way was she going to go near
these seriously scary-looking Venus flytraps! ;O
Posted by YTSL at 7:25 PM

Wonderful shots. I love seeing the heron and butterflies as well as the others.

Love the photo of Puppet Ponyo with the butterflies. Glad you kept her away from the Venus Fly Traps!

Thanks! Re the butterfly: I wish I had a less shaky picture of the Glasswing Butterfly -- but I think I was literally shaking with excitement upon seeing it! ;b

I'm glad you love that photo of Puppet Ponyo. I think that's my favorite photo of her in Amsterdam (though not in the Netherlands... I'll put that one up soon! ;b)

Looking at these beautiful butterflies on this cold January day fills me with a warm feeling.

Puppet Ponyo does indeed look "enchanted" and "ecstatic". In fact, she looks so inflated with joy that she appears ready to ascend to the ceiling of the greenhouse in a celebration of nature!

Is it cold over where you live too? The last few days have been some of the coldest I've ever experienced in Hong Kong!

And teehee at your suggestion that Puppet Ponyo was so happy that she could have floated up on the waves of her joy! :D

To answer your question - yes, it has been unusually cold here in Florida where I live...Reading the news about the wintry conditions on Tai Mo Shan, I hope the trekkers who made their way up there learned a lesson given to them by the weather...The cold weather motivated me to re-read some books and watch documentaries about a disastrous expedition on Mount Everest in 1996, where eight people died.

It wasn't just Tai Mo Shan. Quite a few "frost tourists" also went up Kowloon Peak -- presumably not to the very top but only to those sections accessible by road. In any case, many of them seemed to have far more curiosity than sense, alas.

Re the Mount Everest disaster: Jon Krakauer's book is a fantastic read, as I think you know already. But I think the "frost tourists" naivety quotient was more along the lines of the protagonist in Krakauer's "Into the Wild".