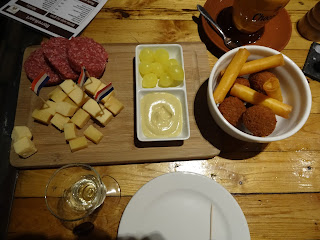 A nice selection of yummy Dutch bar snacks :b 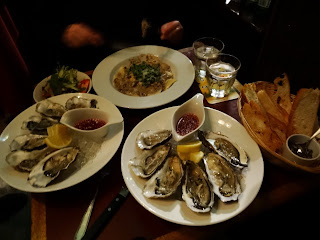 Of the five plates of delicious food on the almost-too-small table,
three of them were mine, mine, MINE! ;b 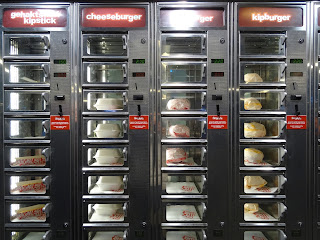 
Decades ago when I used to spend quite a bit of time in England, I came to know of a restaurant in London called My Old Dutch whose specialties included savory as well as sweet pancakes.  As it so happened, I didn't have any pancakes on my recent visit to the Netherlands.  Still, I actually did eat a lot of Dutch food over the course of the trip; and the only times (twice!) I ate anything Asian while there, it was in Indonesian restaurants serving rijstaffel -- which, while composed of often familiar Indonesian/Malay dishes (such as gado gado and rendang), is considered to be a by-product of Dutch colonialism.


Despite partaking of the generous breakfast spread that the Amsterdam hotel that I stayed in laid out daily, I still ended up also having lunch and dinner every day that I was in the Netherlands.  Often times, I'd just have a sandwich at lunchtime but there were days I was hungrier and ordered more substantial fare like snert, a pea soup so thick that it seemed more of a stew than its name makes it seem.  Oh, and vegetarians should beware: this pea soup also has chunks of meat sausage in it as well as carrots and such, and is frequently served with a piece of bacon atop a slice of buttered bread!


Something I had every day (at breakfast, lunch or dinner) while in the Netherlands was cheese.  The Hotel Larende's breakfast options included Gouda but also Turkish white cheese.  Often times too, I'd find a slice of cheese in a sandwich I ordered.  In addition, cheese cut into small cubes and meant to be dipped in mustard is a popular bar snack that I ordered more than once while drinking and dining out at such as an old brown cafe, the wonderful Brouwerij Het Ij's convivial pub or an atmospheric cafe-restaurant located in the historic De Waag.


Probably the culinary highlight of my Dutch trip were the two dozen oysters in total that I ate while there.  On two occasions, I was served French oysters.  But I actually do reckon that the most delicious of these shellfish that I sampled in the Netherlands were the Zeeland oysters that came from the territory's own shores.  (And lover of a bargain that I am, I have to say how happy I was to see very fresh oysters priced so much more cheaply than is the case in Hong Kong!)


Something else served raw that I found very much to my liking was ossenworst, chunks of raw (yes, really!) meat that I saw translated on one menu as ox tongue and on others as beef.  In any case, eaten by itself, dipped in mustard or as the filling of a sandwich, I totally was won over by this Dutch delicacy I didn't know existed prior to my setting foot on Dutch soil.

A Dutch culinary specialty that I knew about before I went to the Netherlands and definitely wanted to try was bitterballen.  I had seen photos of it and seen it described as like fried meatballs.  But as I found out, the inside is actually more "liquidy" than the dry burger type filling that I had expected to see and eat -- and, actually, quite a bit tastier!

Although I had heard about the Dutch loving chocolate sprinkles, and even having that on toast for breakfast, I actually didn't have any on my visit.  Neither did I eat any herring or get any chips from the stalls that just seemed too open to the elements for my liking on a cold winter's day or night!  And while I like the look of FEBO's automated wall dispensers, I have to admit to thinking that food from there might not be all that tasty, never mind good for me!

Not having as much of a sweet tooth as many people (including, it would seem, the average Dutch person), I also didn't eat too many sweet things while in the Netherlands.  At the same time, I felt like I needed to try the famous stroopwafel, crispy waffle-type cookies with oozy caramel inside of them.  So I ended up buying a tin of it -- complete with an illustration of cross-mouthed Miffy along with a windmill and other quintessentially Dutch emblems on the tin -- and have to say that they really are a most inspired culinary creation! ;b
Posted by YTSL at 7:00 PM