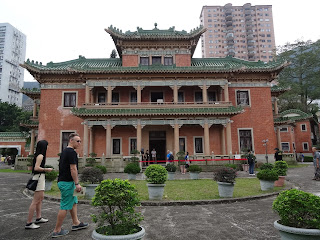 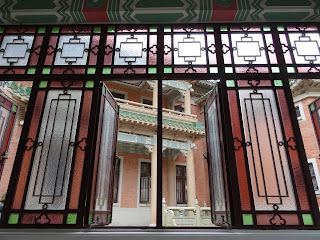 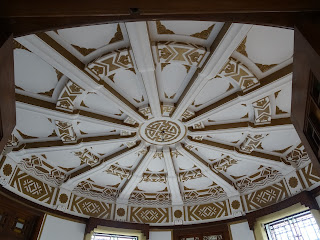 Ornate decoration on the ceiling of one of its rooms 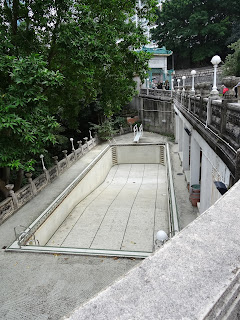 Did you know that there's a swimming pool
within the grounds of King Yin Lei? :O


Pretty much every time I take a bus up to Victoria Gap or Wan Chai Gap (almost invariably for a hike), I make sure to look out for the distinctive mansion known as King Yin Lei.  Built in what's known as the Chinese Renaissance style (like St Mary's Church in Causeway Bay) in 1937 and originally given the name Hei Lo, it was designed by a British architect (A. R. Fenton-Rayen) and became one of the first residences in the Mid-Levels to be home to an ethnic Chinese family (with a woman named Li Po Lun as its owner).

In September 2007, there was much public outcry when it looked like King Yin Lei was going to be demolished so the land it was on would be redeveloped.  By the Hong Kong government stepped in to prevent this happening, windows and doors had been smashed, the roof had been stripped of its glazed tiles and quite a bit of other destruction had been wreaked on the building.  Belatedly declared a monument in July 2008, restoration work on the mansion commenced in September of that year and finally completed in December 2010.

A few years ago, King Yin Lei began being open to the public -- but only on a few designated days in the year.  A few weeks ago, I finally got a ticket for one of its Public Open Days and earlier today, paid my first ever visit to this mansion that's a prime example of Hong Kong-style "East meets West" architecture.

As I walked through King Yin Lei's main gate, almost the first thing that caught my eye was a swimming pool -- which I previously had no idea it had, since it's not visible from the bus!  Also not visible from the bus was King Yin Lei's subsidiary buildings, including a small pavilion and a subsidiary building whose ceiling decoration reminded both a friend I was with and myself of the Long Corridor of Beijing's UNESCO World Heritage-listed Summer Palace.

The surprises continued after I entered King Yin Lei's main building.  Among the features that stood out as unusual was the modest size of the master bedroom (especially in the context of the large size of the mansion as a whole), the one bathroom we got to see having a disarmingly pink and lavender color scheme, and the antiseptic looking kitchen being placed on the middle floor of the building rather than the ground floor, as would seem more normal!

I'd love to have gotten explanations of what was behind those architectural decisions -- and whether what we saw conformed to the original interior arrangement of the mansion.  Sadly, although there were designated docents about, all of the queries -- including how many rooms were on the upper-most floor of the building that's completely off limits to the public --  that I and my friends asked got nothing more than "I don't know" responses.  And although there were a number of information panels in a few of the rooms of the main building and also what was King Yin Lei's garage, there was much less information about the history of the mansion and the people who had lived in it than there was about the restoration work that had been undertaken.

Upon entering the grounds of King Yin Lei this afternoon, I had been given an information pamphlet and four souvenir postcards.  While I think this a nice gesture, I really would have welcomed getting more information about the place, particularly that which would have helped me to better imagine what life was like there when it was an actual residence.

As it is, I have to just speculate as to whether the kitchen was located so close to the master bedroom because a head of one of the families that lived there had been an invalid for at least some of his or her years and thus bed-ridden.  I'd also like to know the story behind why there's a religious altar placed on a wall in the garage and another placed in a prominent in one of the central ground floor rooms of the mansion -- neither of them being the usual places to find religious altars in a Hong Kong home.  Heck, I wish I knew why the decision was made to have King Yin Lei built in the Chinese Renaissance rather than a more conventional Western or Chinese style.

Put another way: My visit to King Yin Lei made me more interested and curious about the place and its owners, particularly the original one who had commissioned its construction.  And I hope that now that the mansion's been physically restored and it's been made open -- on selected days -- to the public, efforts can be made to inform people more about this heritage site, and in an interesting way that makes history come alive.

I enjoyed reading this entry. Saving this interesting "Chinese Renaissance" mansion from destruction is an example of the Hong Kong government doing something positive. In a link you provided in this text (IMDB), I read that scenes from a Hollywood movie, Soldier of Fortune (1955), were filmed here...My favorite Hollywood Hong Kong film is The World of Suzie Wong (1960). On the negative side, this film reinforced the stereotype of subservient Asian women. However, it has the best on-location color cinematography of Hong Kong street scenes I've ever seen in a feature film and has true nostalgic value as a visual record of a Hong Kong long past.

I think you'd enjoy visiting King Yin Lei. And yes, I'm glad that the Hong Kong government has saved the mansion. But think about the huge amount of money they could have saved if they had declared it a heritage monument BEFORE it was in real danger of getting torn down! Also, they need to better present it to the public.

With regards to Hollywood movies filmed in Hong Kong: I don't think there's any that I truly like, alas -- and it makes me doubly glad to have seen many Hong Kong movies made by local filmmakers that portray Hong Kong the place in a positive and/or interesting light.