Martinis and wanders down Memory Lane at Bar Butler 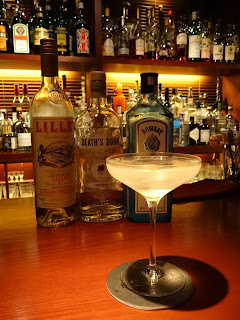 The cocktail that got me hooked on
going to Bar Butler 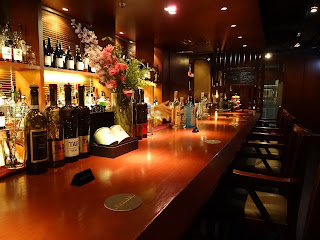 The cocktail bar's decor and atmosphere has grown
on me with each visit too :)


Years ago when I lived in Philadelphia, a friend and I had a ritual of going to a neighborhood Japanese restaurant and ordering sushi to eat and vodka martinis to drink.  These days, I much rather drink sake when eating sushi (and/or sashimi).  But martinis have remained my favorite cocktail.


Not surprisingly, then, the very first drink I ordered at Bar Butler was a vodka martini with olives -- and I honestly think that it was the best vodka martini I've ever had in my life.  After I finished the drink and contemplated what to have next, the bartender at this Japanese cocktail bar over on Kowloon-side asked me if I had ever had what he called "the James Bond martini".  Although 007 has been known to drink vodka martinis and gin martinis, the most "James Bond-ian" of martinis appears to be that which contains vodka and gin as well as a French aperitif wine called Lillet.


After I decided to go ahead and try this martini that I have to admit to previously not having heard of before (which goes to show how little I know about James Bond's world), I was presented with a glass of what I came to know is actually called the vesper martini.  Amazingly, it was even better than the best vodka martini I ever had -- and because of that one drink, I've been going to Bar Butler quite a bit more times in the past few months than I'd expect to go to a bar in a part of town (Tsim Sha Tsui) that I don't usually spend that much time in!


Everytime I go to Bar Butler now, I have to start the evening with a vesper martini.  But whereas the first night that I drank there, I had stuck to vodka-based cocktails, I've since expanded the range of cocktails I'm willing to try and happily imbibe; this especially after discovering that Bar Butler also makes cocktails using chartreuse, mezcal and absinthe!


While absinthe is one of those alcoholic beverages that I had long heard of but never tried until recently, I was introduced to mezcal and chartreuse at earlier points in my life -- both of them pretty memorable.  When I lived in Philadelphia some time back, I had a few friends who were Latin American specialists in their field.  At a party one evening, one of them brought a bottle of mezcal with a worm and volcanic ash in it.  Although that would render it undrinkable in the eyes of many, we went ahead and tried it -- and I, for one, found this smokey tasting (even without the volcanic ash!) distilled alcoholic drink to be quite palatable!


Years before I moved to Philadelphia, I went to boarding school on the other side of the Atlantic Ocean in England.  One exeat weekend, the family friends I was staying with took me to dinner at the home of a couple who were good friends of theirs.  After we finished our meal, we chatted a bit and had some after dinner drinks.  That was when I was introduced to the 110 proof liqueur made by Carthusian monks since 1737 -- and also heard our female host disclose that she originally hailed from France, was Jewish, and was a concentration camp survivor (with a tattoo on her arm as proof).

Almost needless to say, I think of her and the occasion that I had my first taste of chartreuse whenever I drink that herbal green drink.  And I think of my closest Latin Americanist friend -- who, incidentally, was the friend I used to go have sushi and vodka martinis with! -- whenever I have some mezcal.   And I love that I've been able to taste those alcoholic beverages again after all these years, in Hong Kong, thanks to Bar Butler. :)
Posted by YTSL at 10:11 PM

Alas.... I don't drink alcoholic beverages.
Whoa... do you have the story of the concentration camp survivor? I am fascinated.

You should try Caiperinha sometime. (http://allrecipes.com/recipe/20210/caipirinha/) If you prefer Vodka there is a Vodka version called Caipre-Voska. Just substitute the Cachaca with Vodka and you've got it.

I've read they also have a Sake version which you would be unlikely to have a hangover. My first and only hangover was from a double Caiperinha which my Brazilian colleagues tricked me into having it back in 1998.

Just remember you mentioned absinthe..... This could easily be purchased in bigger supermarkets around. Most commonly available ones are Recard or Pernod (https://www.google.com.hk/search?q=ricard+absinthe&espv=2&biw=1317&bih=626&source=lnms&tbm=isch&sa=X&ved=0ahUKEwinyYqtza_JAhXDp5QKHW20C_8Q_AUIBigB).

However a friend informed me that a small wine shop in High Street (Pastis Wine Cellar) carries a very good and unknown one (http://www.pastishenribardouin.com/) Not exactly an absinthe but it is infused with Anise and other herbs all the same.

That evening when I was introduced to chartreuse took place many years ago. I have to admit that I don't remember enough to tell my hostess for the evening's story -- sorry!

I've heard of caipirinha but it's thus far not appealed that much. Guess I should try it some time though -- but I definitely would not go for the sake version as I like my sake neat!

And wow re your telling me that absinthe can be easily found in the bigger supermarkets here in Hong Kong -- this especially since this up to 148 proof alcohol was banned for decades in the US and many European countries! :O