An afternoon that included a hike up in the Kowloon Hills and a ferry ride across Victoria Harbour :) 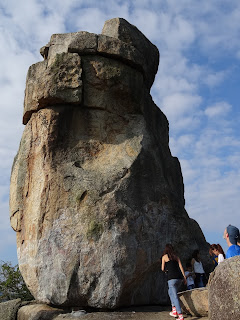 Amah Rock (aka Mong Fu Shek) viewed from up close,
with a few folks also in the frame to help give an idea of its size :) 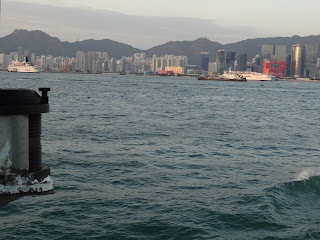 View from Victoria Harbour looking northwards to
the Kowloon Hills, including Lion Rock and also Sha Tin Pass
While taking in the splendid views and enjoying the fresh breeze on board the Kwun Tong-North Point ferry earlier during this beautiful blue sky day, I turned to my friend and confided to him: "On days like this, I feel so lucky to be living in Hong Kong."  He responded first with a smile, then told me: "You know, I was just thinking the same thing!"
Earlier in the afternoon, he and I had met up with three other friends to take a bus to the trailhead for today's hike.  The first, completely uphill section of our excursion took us from the high density residential area of Tsz Wan Shan (which recently was in the news as a result of feral monkey invasions!) up a few hundred meters to Sha Tin Pass.  From there, we went along a section of the Wilson Trail that took us in the direction of Amah Rock, today's hike highlight.
One of the most famous natural rock formations in Hong Kong (along with Lion Rock), Amah Rock -- whose Chinese name translates into English as "gazing out for her husband rock" -- is said to have a shape resembling a woman, with a baby on her back, gazing out to sea.  If truth be told though, from the direction that we saw it for the most part, the 15-meter-tall rock actually more resembled a woman sitting on a chair to me -- and when you see it from up close, it gets me thinking more of a monumental piece of abstract art than a petrified fisherman's wife and child waiting in vain for a man's return from sea of legend!
This is not to say though that I don't think that Amah Rock isn't worth checking out, or that the climb up to it isn't worthwhile -- and this even though it's situated at a not to be sneezed at some 250 meters above sea level, on the northern slopes of the Kowloon Hills!  But I reckon it's best to combine the trek up (and down) Amah Rock with other sections of trail, and preferably something more interesting than (just) the sections of the Wilson Trail near it that are mainly on the side of a not particularly photogenic catchwater.
At the end of today's trek (which ended by the side a highway on the other side of the Kowloon Hills from where we had set out), my friends and I were in agreement that today's had been a pleasant hike.  One big factor that made the excursion especially enjoyable that was the lovely weather we had today -- one which got us thinking that summer really is finally over and the first genuine days of autumn are upon us at last!
Partly because it was considerably less hot and humid than much of the past few months have been, we made pretty good time on the hike -- and ended up finishing up ahead of schedule and too early to have dinner at nearby Tai Wai!  Instead, we made for home -- with one friend and I being able to enjoy a Victoria Harbour ferry ride along the way.  Consequently, we managed to enjoy being both up in the hills and on the water in a single afternoon -- just one of the many cool things about living in a place with lots of hills and coastline like the Big Lychee. :b
Posted by YTSL at 9:24 PM