Naomi Kawase's An is bittersweet but pretty palatable (film review) 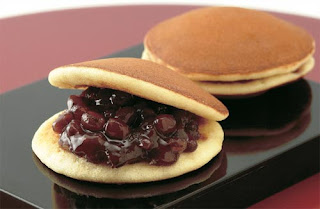 Image of an (red bean)-filled dorayaki
(found at My Scribbled Journey and Nice! Japan)


Strange but true: Back in 2000, a Hong Kong filmmaker known as Fruit Chan made a drama called Durian Durian.  Now, 15 years later, Japanese director-scriptwriter Naomi Kawase has adapted a novel by a writer named Durian Sukegawa into a film in which an edible item features: no, not durian -- that would really be too weird! -- but, rather, dorayaki (a type of Japanese confectionary) and, in particular, their an (red bean) filling.


Much of An takes place at the dorayaki shop operated by Sentaro (Masatoshi Nagase), a middle-aged man who isn't given to smiling much and actually isn't partial to the particular confectionary that he makes and sell!  But although he doesn't appear to be all that friendly (and might even be described as friendless), Sentaro's heart is shown to be in the right place by his care for Wakana (Kyara Uchida), a quiet schoolgirl regular at his shop, by doing such as regularly giving her packets of the dorayaki he made that he deemed not good enough to sell but still are edible.


One spring day, when the cherry blossoms near the shop are in full bloom, an elderly lady appears at the shop to ask Sentaro if she'll take him on as his assistant. Tokue (Kirin Kiki) is on the frail side and her hands look misshapen by disease -- but it turns out that she's able to make absolutely delicious an that, when used as the filling for Sentaro's dorayaki, sends his sales numbers sky high.


For a time, the shop does roaring business, Sentaro's spirits lift and Tokue is almost beside herself with delight at how much people love the an that she makes with the utmost care (and with an uncommon degree of respect for the ingredients, particularly the red beans that she sometimes talks to and tells Sentaro have interesting stories to tell!).  But as the seasons change to autumn, fewer and fewer people patronize the dorayaki store, due to a certain rumor spreading about Tokue that causes many people to react with fear and by seeking to steer clear of her and anything that she touches (including her delicious an).


Although An does indeed possess a number of scenes showing how dorayaki, and in particular its an filling, being made, it isn't the kind of the film that will make you all that hungry.  Clearly, Naomi Kawase's heart was far less into making a fluffy movie that will appeal to taste buds and more into crafting a bittersweet work that gets viewers to contemplate how certain humans can be so callous while others so benevolent, and able to derive so much joy from the little things in life even after having been dealt a bad hand by fate.


Despite having second billing and less screen time than Masatoshi Nagase, Kirin Kiki easily steals the show from An's lead actor.  Having seen her appear fit and feisty recently in Our Little Sister, it was rather shocking for me to see the septuagenerian actress appear so physically fragile in this affecting film, and to learn that, in real life, she's been battling cancer for more than decade.


On a happier note: I think it a fun fact that Kyara Uchida, whose character effectively become Kirin Kiki's character's surrogate granddaughter in the movie, is the veteran actress's real life granddaughter.  Also, that in appearing the same movie as Kirin Kiki, young Kyara was following in the footsteps of her mother, Yayako Uchida -- although in the latter's case, she never did share time on screen with Kirin Kiki since Yayako played her mother's character's younger self in 2007's Tokyo Tower: Mom and Me, and Sometimes Dad!