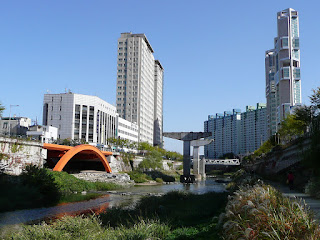 It's the dream of many Koreans to work in
an office and live in Seoul
Office (South Korea, 2015)
- Hong Won Chan, director
- Starring: Ko Ah Sung, Park Sung Woong, Bae Sung Woo
A couple of months back, I watched two movies with the word "assassin" in their title in the space of a few weeks (i.e., Choi Dong Hoon's Assassination and Hou Hsiao Hsien's The Assassin).  And now I've watched a South Korean film entitled Office -- which, like Hou's offering, had its world premiere at Cannes this year -- just a few weeks after checking out Johnnie To Kei Fung's movie with the same name.
Less glitzy than Johnnie To's adaptation of a critically acclaimed theatrical production, Hong Won Chan's work also promised to be considerably grimmer -- beginning as it did with a troubled sales manager (Bae Sung Woo) going home and murdering his wife, young son and elderly mother after a particularly bad day at the office.  And when the cops go to his workplace to investigate, lead detective Choi Jung Hoon (Park Sung Woong) quickly get the sense that all is not well there; not least because several of the now very wanted wage slave's workmates appeared reluctant to be entirely truthful in their assessment of him.
Those of us who have worked in offices will quickly be able to figure out that the stressed out salaryman who had suddenly snapped one evening had slaved away for years in a workplace filled with less than collegial colleagues who wouldn't think much about stabbing others in the back (metaphorically, even if not literally!).  First time director Hong's film is particularly strong in its depiction of how nasty people can be to those they perceive as weaker than them, and how the self-esteem and psychological health of individuals like the sales team's lowly intern Lee Mi Rye (Ko Ah Sung) -- a country girl trying to make it in the big city of Seoul -- get incredibly negatively impacted by their poisonous workmates.
Once the penny drops, more than one of the sales team's members get to realizing that after doing away with his family, the man who they had spent many hours working beside -- and sometimes not behaving well towards -- would be targeting them next. And after a weasily assistant sales manager (Kim Eui Sang) is found dead in the office soon afterwards, the paranoia levels of the remaining members of his section, including their bad-tempered, abusive boss (Kim Eui Sung), shoot sky high.
Although this scenario is one that most people would already find pretty nightmarish, those behind Office decided to up the ante and add some hallucinatory elements into the mix.  In so doing, they threw quite a bit of logic -- and audience sympathy -- out of the window and consequently turned what was an involving combo workplace-crime drama into a eye-rollingly far-fetched horror work.
A scriptwriter turned director, Hong Won Chan turned over screenwriting responsibilities for this effort to Choi Yun Jin, whose script is full of painfully "spot on" lines about -- and showing -- the nastiness of workmates and the office environment but also delivered a story containing too many plot holes.  Surely it's only natural then that upon viewing this sadly flawed movie, I found myself wondering if a better work would have resulted if Hong had been responsible for the script and turned over helming duties to a more experienced, and capable, director.