A Sai Kung West Country Park hike with scenic views that can brighten up one's mood :) 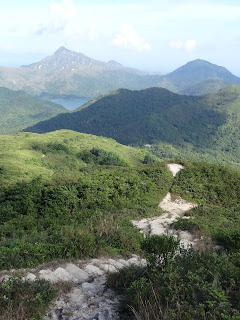 Section 3 of the Maclehose Trail begins with a hike up
a steep slope but the splendid views make up
for all the sweating and straining it requires :b 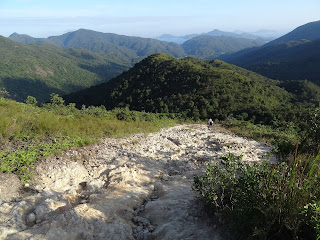 Largely unpaved, sections of the trail can resemble
a river of rocky and pebbly bits!
This afternoon, I arrived in Sai Kung town in not the sunniest of moods because of certain goings-on at Hang Hau, where I boarded the green minibus to Sai Kung.  For one thing, although the queue for the minibus was on the short side when I joined it, it ended up having become thrice as long by the time a minibus came over and began accepting passengers some 35 minutes later.
Frustratingly, this looked to have been the result of a whole bunch of minibus drivers had decided to take a lunch break at the same time!  Adding insult to injury, one shameless man (who I got the distinct feeling came from the territory to the north of Hong Kong) who had arrived late on the scene refused to queue up along with everyone else -- and after stopping him from getting into a minibus when he tried to do so the first time, the guy in charge gave up and allowed him to jump the queue the second time he went about his weasely act!
Things took a turn for the better though when the friend I met up with in Sai Kung town and I didn't have to wait long at all for the green minibus that'd take us from town to Pak Tam Au, from where we'd begin today's hike (which started off with our going along the beginning portion of Section 3 of the Maclehose Trail).  And my black mood soon lifted after we got to higher ground and became privy to some stupendous views on this high visibility, beautiful blue sky day (which was actually hotter than I expected it to be but thankfully not super humid).
Much has been written about exercise making people happy, including by way of releasing "happy chemicals" (i.e., dopamine) into your brain, and I can safely say that my friend and I definitely got in a good workout this afternoon -- seeing that we hiked for four hours in pretty hilly terrain!  There's also something to be said about there being innately calming effects to being surrounded by greenery (something I learnt years ago when taking a joint psychology-sociology course at Beloit College and being shown a padded room in a mental institution which had been painted entirely green that agitated inmates were put in to regain their composure).
What I know can make me inordinately happy too when out hiking is to look around and find myself being treated to beautiful views -- and this section of the Maclehose Trail that goes through Sai Kung West Country Park most certainly has that in spades!  Indeed, I'd go so far as to state that all the grand scenery on view this afternoon made up for there being far fewer critter spottings than I consider ideal, and the most interesting critter spotted (a small lizard similar to ones I've spotted elsewhere in Hong Kong, but cool to come across all the same!) today having quickly scurried away into the bushes before I was able to get my camera out of my shorts pocket! ;D
Posted by YTSL at 10:50 PM

If you are not living in the TKO area, maybe next time you could consider taking another maxicab route starting from Telford Garden. That would be Route #1. Its terminus is under Phase II of Telford Plaza.

On the other hand, I'd usually go for KMB at Diamond Hill MTR Station as you don't usually have to wait too long for a bus.

I don't live in the TKO area but Telford Garden is too out of the way for me. I've actually tried many ways to go to and from Sai Kung town (including the KMB bus from Diamond Hill, green minibus from/to Po Lam and red minibus from/to Causeway Bay) -- and the Hang Hau green minibus option usually works best for me. Yesterday was a real anomaly. I honestly wondered for a time if there was a strike or go-slow action going on! (Also, before you ask, I actually went to get the green minibus at my usual time!) ;S

There is yet another route that both of us had not mentioned: MTR East Rail to Shatin and then hop onto 299X. It runs through Ma Oh Shan - Nei Chung - Kei Leng Ha then to Sai Kung Terminus. Might suit some of your starting points sometime.

Aaah, so that was you previously! I should have known! ;)

The 299X is good for if one starts (or ends) a hike on Sai Sha Road. I've actually not taken it to a hike trailhead but I've taken it after a hike to a post-hike dinner place in the Sha Tin area... ;)

Anyway, if we're listing public transport to Sai Kung, there's also the Choi Hung-Sai Kung green minibus of course. It actually was the first one I learnt about -- but I haven't taken it in years, actually!

Your Sai Kung posts are always interesting, especially Stage 3 of the Maclehose Trail. This entry captures some memorable views and obviously also provided you with a good physical workout...I recall your previous posts, "Kai Kung Shan" and the awesome views, especially the photo of the huge concrete circular structure. Do you know if this can be reached further uphill on the Mac Trail?

If I may change to another Hong Kong-related topic, one of my favorite online sites is currently, neonsigns.hk, an online exhibition of the gradually vanishing neon signs of Hong Kong. I hope the museum for M+ is eventually completed...One of my favorite signs is the neon cow of Jimmy's Kitchen, which once overlooked a street in Western. I hope it remains safe in storage and hopefully may one day find a new life, perhaps among the media exhibits of the West Kowloon Cultural District.

The Maclehose Trail's Section 3 leads one up (and down) Kai Kung Shan. But Shek Uk San -- whose huge concrete circular structure (i.e., a helicopter landing pad) I think you were thinking of* -- is not on the Maclehose Trail.

*Is this what you were referring to?
http://webs-of-significance.blogspot.hk/2014/02/on-high-ground-in-sai-kung-peninsula.html

With regards to the West Kowloon Cultural District: I have to admit to no longer being all the excited about it because who knows when it eventually will come to fruition? :(