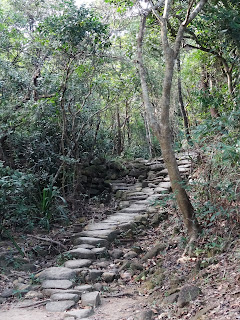 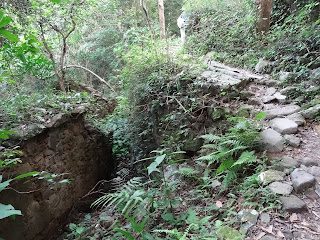 Far less usable though are the ruined buildings found along
a section of the Pak Kong to Mui Tsz Lam ancient trail
I hiked with two friends from Tai Shui Tseng, on the outskirts of Sai Kung town, to Tai Shui Hang, on the outskirts of Ma On Shan town, this afternoon.  For much of the hike, we walked along old boulder trackways which connected villages and market towns before the development of Hong Kong's modern road and rail systems.
The exact age of these ancient trails is not known but the majority, if not all, of them are thought to pre-date the arrival of the British in these parts, not just Hong Kong's 1997 handover by Britain to China.  Often following natural contours and/or stream and water courses, going over passes and along ridgeways, their routes are often scenic and pass by villages, abandoned and/or still in use.
In recent years, some portions of these old boulder trackways -- including sections of the Yuen Tsuen Ancient Trail laid out and used in the olden days by residents of the market towns of Yuen Long and Tsuen Wan, and areas in between -- have been paved over by the authorities.  The main reason for there doing so is because of their fear that these old paths made of carefully arranged boulder and stones are not all that safe or stable because those who laid them out did not use concrete.
Admittedly, there are times when I've worried about slipping and falling on some of the steeper old boulderpaths in areas that get little sunlight because of thick tree cover, whose surfaces are liable to get covered by moss and other fungal growth.  But I've actually tended to find these ancient trails to be in remarkably good condition, and more pleasant to walk on than newer, super concreted paths.

In any case, I often actively look to hike on trails where one can go along these old paths and often feel like one's stepping back in time, particularly when passing old terraced agricultural fields and villages (which, more often or not, have been abandoned).  And I don't think it a coincidence that my friends and I enjoyed the portion of our hike today that took us to Mui Tsz Lam along an old boulder trackway more than the more modern roadway out of that village towards Ma On Shan new town.
Posted by YTSL at 10:16 PM

Welcome back to my blog. Glad to see you visiting despite my no longer taking part in the Photo Hunts! :)

Your comments ended up in my spam folder. Finally saw them and am happy to spread the word about your good work!