A hike from Shing Mun Reservoir to Tai Wai (Photo-essay)

Over the years, something that has surprised me is how many regular Hong Kong hikers, local and expat, are content to stick to just one part of the territory and/or just the major hiking trails like the 100-kilometer-long Maclehose Trail (which this year's Trailwalker participants are going along as I write this) or 50-kilometer-long Hong Kong Trail.  For, in contrast, I like trying out different trails that allow me to go along and view sections of the Big Lychee that I had never previously been to or seen; this not least because, often in the process, I discover alternative ways to connect one part of Hong Kong to another.

So while it wasn't the most scenic of hikes that a friend and I went on one Sunday afternoon, I thought it pretty cool that, after a short detour to explore the ruins of the Shing Mun Redoubt, we went from Shing Mun Reservoir over to Tai Wai on a route that neither of us had previously been on before.  To judge from the small number of other hikers we saw along the way, few people seem to know about it -- something which, of course, made this particular exploratory excursion seem even more satisfying to us! ;b 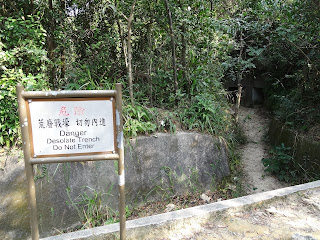 Despite the warning signs, I've seen lots of people (including
what looked like a school party) venture into the tunnels
and other sections of what's left of the Shing Mun Redoubt 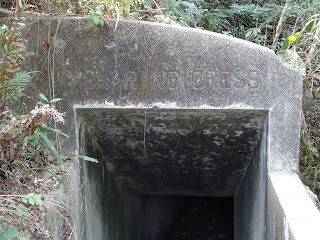 As long as the ruins remain, there will always be a
Charing Cross, Picadilly Circus, Shaftesbury Avenue,
Regent Street, etc. in Hong Kong 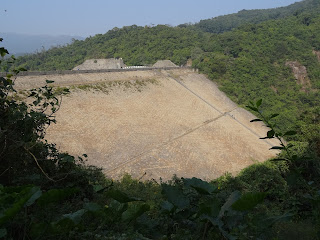 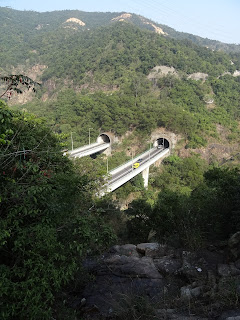 Not far away though lies the Shing Mun Tunnels
connecting Tsuen Wan and Sha Tin, and these short sections
of visible road between far lengthier sections of the tunnels 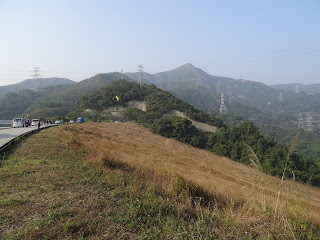 If not for this hike, I'd not have known how scenic the area around
Lower Shing Mun Reservoir is, and how popular it is
among such as operators of remote controlled aircraft! 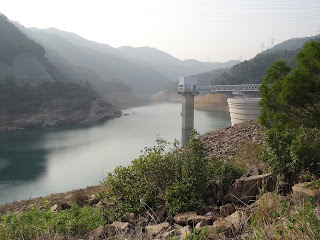 The view to the west of this reservoir's dam 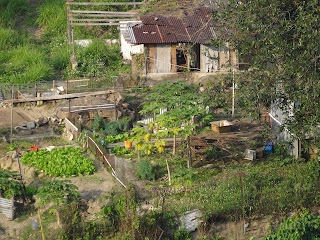 Walking eastwards, we passed by a still rural section
of the Sha Tin Valley 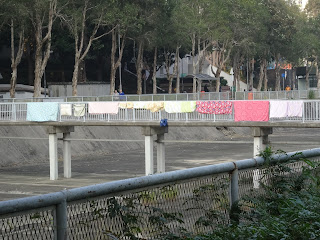 On the outskirts of Tai Wai, people's washing hung on
the railings of bridges going over a dry section of the
Shing Mun River -- a sign that we were back in "civilization"! ;b
Posted by YTSL at 7:28 PM

Is this the track that runs along the south of the lower reservoir? If so I did this with my kids a year or so ago and was astonished by how decrepit some parts have become - to the point of it being quite treacherous. It was only when we came down the steps at the end did we see a sign saying "for experienced hikers only" - and my youngest was only 4 years old at the time!!! He's a real trooper.

You're right -- it's the track that runs along the south of the lower reservoir and I'm amazed your kids managed to complete the hike! I actually thought of putting up a photo of the trail to show people it's condition but thought that wouldn't be of too much interest. Maybe I'm wrong there!