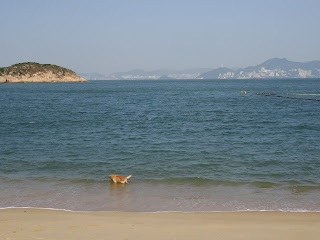 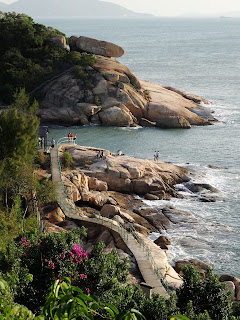 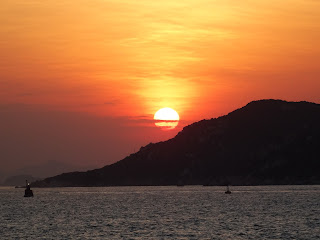 We got to see the setting sun turning the sky beautifully orange and red
on the ferry ride from Cheung Chau to Hong Kong Island
Earlier today, I took part in a beach cleanup on Cheung Chau.  This wasn't the first time I had taken part in a beach cleanup on what may well be my favorite of Hong Kong's outer islands.  Neither was it the first time I had gone to that which has been nicknamed Dumbbell Island (due to its shape) this week -- for I had taken a cousin of mine who's visiting Hong Kong (from Singapore, where she lives and works) there for a yummy seafood lunch at Hong Kee and bonus island exploration a couple of days ago.
My cousin commented later that she's pretty sure that most Malaysians and Singaporeans who come to Hong Kong for a holiday would ever think of visiting Cheung Chau.  (Instead they tend to stick to the central sections of Hong Kong Island and the Yau Tsim Mong section of the Kowloon Peninsula for their dining as well as shopping "needs".)
I'm sure she agrees that this is a pity since she appeared very much charmed by this island which is home to many interesting temples (including the Pak Tai Temple of Cheung Chau Bun Festival fame), a few nice beaches (not all of them as terribly dirty as poor old Tung Wan Tsai (AKA Coral Beach), which gets more than its rubbish being directed there by the currents) and scenic paths to hike on or stroll along as well as a number of seaside restaurants specializing, not surprisingly, in seafood.
In the few hours that the two of us were on Cheung Chau that day, I managed to show my cousin quite a bit of the island; what with our venturing as far north as the Pak Tai Temple, as far east as Kwun Yam Beach, and as far south and west as the area near the reclining rock.  Along the way, she got a little bit of culture (via such as the visit to Pak Tai Temple) and a taste of the island's natural attractions (by way of our checking out a couple of its beaches and rock formations).  Oh, and not content with having a big lunch, we also got a stick each of the extra large fish balls that are a Cheung Chau specialty as the last thing we did on our island excursion that day!
As an added bonus, on the ferry ride out of Cheung Chau that day, we witnessed the setting sun putting on quite the show, turning what had been still blue skies and waters when the boat left the island a glorious blend of yellow, orange and red before it all got dark around the time that we sailed into Victoria Harbour! :)
Posted by YTSL at 11:29 PM

Such a beautiful place. That's good to take part in the beach clean up. I've never done official cleanups but frequently when I walk I pick up trash along the way and always try to at the beach when I see any. Don't understand why people can't pick up after themselves.

Lovely photos. Sounds like you had fun plus good eats and interesting places to visit with your relative.

Had to enlarge the 2nd photo I thought there were some deers on the rocks. But your sure visit a lot places.
Coffee is on

Before I started taking part in beach cleanups, I had passed by beach cleanups in progress while out hiking. Now that I know of a group that does it monthly, it's been easy to get into the habit of taking part. And yes, I too find it hard to understand why some people can't (be bothered to) pick up after themselves.

Yes, my cousin and I had a fun time in Cheung Chau -- like you, Tara and I did too many years ago now! :)

There are deer in Hong Kong but I've yet to see them in the wild, let alone capture images of them with my camera! ;S