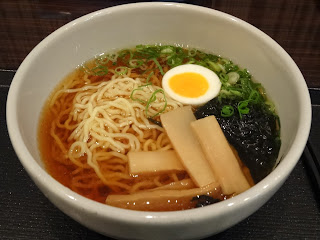 
To judge from the number of eateries in the Big Lychee specializing in dishes featuring that noodle, ramen is the king of Japanese noodles as far as Hong Kongers are concerned.  In all honesty though,  conventional ramen actually ranks lower in my estimation than soba, udon, somen, and the dipping ramen variation known as tsukemen that Kazuo Yamagishi is credited with having originated.

In Takashi Innami's documentary on Yamagishi, patrons can be seen eating tsukemen at the original branch of Taishoken (which began operations in 1951).  For some reason, however, tsukemen is never mentioned in The God of Ramen, only ramen.  Also, while Yamagishi-san is shown creating the magical broth whose taste none of his many apprentices can quite replicate (even while he openly and regularly showed them what went into it and how it's made), it often seems like the most remarkable thing about Taishoken's rustic offerings -- as far as the makers of this at times noticeably unpolished film are concerned -- is the extremely generous portions that are served at the noodle shop.

There's a part of me that thinks that the filmmakers' chosen focus doesn't do justice to Yamagishi's culinary abilities.  At the same time, The God of Ramen does successfully illustrate the man's amazingly generous nature, one which extends to his customers -- even those who have never spoken a word to him -- as well as his apprentices, a number of whom have gone on to open their own noodle shops named Taishoken (because Yamagishi never trademarked the name and doesn't charge royalties for its use).


Featuring over 10 years worth of film footage, The God of Ramen provides the viewers with glimpses of Yamagishi in his younger days courtesy of black and white photographs but its subject mainly appears in the documentary as a septuagenarian who already is not in the best of health.  Early on in the film, the camera follows Yamagishi into a hospital where the severely overweight old man is told by a doctor that he needs to have operations carried out on his knees, otherwise he will cease to be able to walk within a year, and that he also needs to deal with the problems with the fingers on both of his hands that regularly cause him a significant amount of pain, including when he's cooking.


Seeing Yamagishi ignore his doctor's advice for several months in favor of carrying on with his daily routine is heartbreaking and frustrating.  This feeling is compounded by there being a sense that, even while one does often see him smiling while serving his customers, he's going about his business more because he doesn't know what else to do rather than because it makes him genuinely happy.


Put another way: even while Yamagishi was satisfying lots of people, he looked to be in quite a bit of physical pain.  Worse, he also came across as suffering psychologically from a lot of sorrow eating at him from within -- the result of his having never gotten over the death of his beloved wife, Fumiko, from stomach cancer at the age of 52, more than a decade ago.  So devastated was Yamagishi by Fumiko's passing that he closed up the part of the building where the couple had made their home, refusing not only to step into that space but also threatening to stop the filming of what has turned out to be far more of a character study than a culinary documentary if its director insisted on venturing in there.


More than once in this emotionally revealing film, the sense was given that the childless widower wouldn't have minded dropping dead one day, so that he could be reunited with Fumiko.  But while he stayed alive, he was going to tend to Taishoken, where Fumiko had worked alongside him for decades -- and which continued to regularly attract super long lines and fanatically devoted customers, some of whom consumed its noodles every day of the week that it was open, others of whom had come from hundreds of kilometers away to eat at the very modest-looking noodle shop in East Ikebukuro.


Yamagishi passed away earlier this year at the age of 80.  Some may think that a life spent largely cooking and serving up bowls of noodles in cramped, not particularly comfortable surroundings may not have been much.  But as this rich-on-pathos work shows, his was a life that touched many thousands of people, a number of whom not only recognized his generosity but also did reciprocate by showering Yamagishi with recognition, love and care.