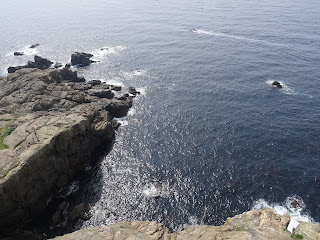 Possessing the sixth longest coastline in the world,
it's almost a matter of course for the Japanese to make
at least one journey to the shore in their lifetime


Perhaps in part because he shares the same surname as the highly esteemed Akira, Kiyoshi Kurosawa's is one of the more recognisable names among contemporary Japanese filmmakers.  Unlike the great director who's most associated with samurai films though, the later-born Kurosawa is best known as a horror movie specialist -- and even though his latest offering is primarily a drama, it's not entirely unexpected that there are supernatural elements in it.


Journey to the Shore begins on a mundane note, with Mizuki (Eri Fukatsu) tutoring a young girl to play the piano.  Later that day, three years after her husband Yusuke (Tadanobu Asano) went missing, he unexpectedly re-appears in their apartment to tell her he drowned at sea but there's no point going to look for his body as it's been consumed by crabs.  So yes, Yusuke is actually now a ghost but he actually looks and behaves like a living human being; so much so that seconds after his reappearance, Mizuki's not only calmly inviting him to sample what she just cooked but also asking him to remove the shoes he's got on!


Yusuke tells Mizuki that since his demise, he's been thinking of various people, living in different parts of the country, who were good to him when he was alive -- and would like to go and see them one last time before he forever leaves the realm of the living.  Telling her that many of the places where those people live are on the pleasant side, Yusuke invites Mizuki to accompany him on his final journey on Earth, one which will end at the seaside locale where he had decided to commit suicide after being depressed (a state of mind he makes a point to tell his beloved wife was not her fault).


After she accepts his invitation, the couple begin their sojourn the next day by taking a train to a sleepy town where they meet up with an elderly newspaper deliveryman (Masao Komatsu) who Yusuke had previously worked for.  Implicitly, then, it gets established that Yusuke doesn't only appear indistinguishable for the most part from other humans in the eyes of Mizuki but other people as well; and this is something that becomes not only part and parcel of this low-key film's particular universe but also a point from which suspense emanates, since it's never immediately clear whether any (or even all) of the people that Yusuke goes to visit are dead (like him) or alive (like Mizuki)!


As this film adaptation of a Kazumi Yumoto novel develops though, it comes to be realized that there is at least one ghost around in every place that Yusuke and Mizuki go and spend at least one night at.  And to each of these dead beings (male or female, young or old) is attached a story of regret, one which Yusuke and Mizuki end up playing a part in resolving in some way or other.


Somewhat episodic in structure, there are some sections of Journey to the Shore which work better and have more dramatic impact than others.  The understated movie's best moments (one of them involving cuttings of paper flowers, another of which involves a haunting piece of music) moved me to tears.  Unfortunately, however, its weakest section came near the end of the work.  So it seemed that its filmmaker did the opposite of saving the best for last -- something he perhaps should have done.