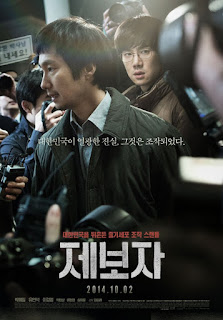 Note: The Whistleblower's titular character
is not in the foreground of the movie's poster


In the middle of viewing one of countless Hong Kong crime dramas whose characters include a police mole, my mother asked who in their right mind would ever accept such a role in real life.  As more than one film also has shown us, whistleblowers are another group of people who often end up having to sacrifice much as well as undergo major hardships -- which again begs the question of who'd be one, even though it's also the case that these individuals actually are doing the morally correct thing rather than doing something terribly wrong.


Among the reasons why whistleblowers often find themselves in (professional, if not personal) less than ideal situations is that they frequently find themselves going up against powerful organizations, including their national government.  And in numerous cases, they find themselves with the dilemma of having to choose between the truth and national interest.


In Yim Soon Rye's The Whistleblower, the titular character not only has to wrestle between telling the truth and keeping mum in order to not shame a nation but also carries the burden of helping destroy the hopes of many with incurable diseases (and those who love them) that a major medical breakthrough has been a made, and a life-saving treatment is within reach.  For Dr Shim Min Ho (Yoo Yeon Seok), matters additionally are personal because he has a chronically ill young daughter whom he had previously hoped could be cured by the scientific work being carried out under the aegis of Dr Lee Jang Hwan (Lee Gyeong Yeong), a scientist with a veterinary -- rather than medical -- degree dubbed "the Pride of Korea" after he claimed to have successfully cloned human stem cells.


After realizing that Dr Lee has fabricated the claims that have brought him so much acclaim from the government and the general public, Dr Shim left his post at Dr Lee's research institute.  Unable to get another job anywhere else, his household's bills acrrue even though his increasingly upset wife (Ryu Hyeong Geong) has continued working at the same institution that his conscience had forced him to quit being a part of.

Probably because he felt he was already at a super low point in his life as well as because he wanted to prevent Dr Lee from continuing to spin his lies, Dr Shim made contact with television news program producer Yoo Min Cheol (Park Hae Il) and broke his silence.  An admirably dogged and thorough investigator, Yoo -- and the young but capable reporter (Song Ha Yun) he enlists to help with his research -- goes in search of evidence that Dr Shim is telling the truth rather than lies and, in the process, uncovers a story that shocks even hardened news people and, they discover, is capable of being so threatening that even the reactions to it can be very disturbing.

This dramatic offering by one of South Korea's few female directors benefits from strong performances by its lead trio of actors, of whom the one playing the titular character actually gets the least amount of screentime.  The Whistleblower also profits from Lee Chun Hyeong's intelligent script chronicling manipulative acts carried out in full view of the public -- and the public's response to them -- along with the behind-the-scenes shenanigans that involve senior executives and government officials attempting to influence editorial decisions and shape news coverage.

Inspired by true events, The Whistleblower will have particular resonance for those aware of the real-life scandal it clearly was based on and who are citizens of the country where it took place.  Regardless of their nationality though, I'm sure that viewers of this thought-provoking movie will come away wondering how many whistleblowers end up making enormous sacrifices that sadly go unappreciated, never mind get rewarded -- especially if they fail to find similarly courageous and ethical individuals to help them open people's eyes and ears.