The Magna Carta in Hong Kong 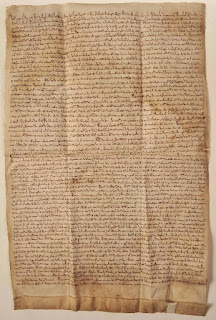 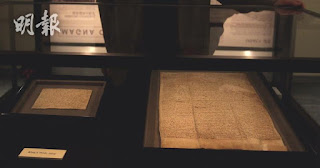 
One of four surviving original copies of the 1217 Great Charter (better known by its Latin name of Magna Carta) arrived in Hong Kong a few days ago -- and unlike on mainland China, it went on display in a venue accessible to the general public.  An iconic document that continues to have great significance eight centuries after its creation, it is looked upon internationally as a symbol of democracy and the rule of law (which territories, like Hong Kong, adhere to but others, like mainland China, do not).


Although Hereford Cathedral's Magna Carta does not bear the seal of a King (unlike the 1215 Magna Carta which effectively was a peace treaty between King John of England and the group of rebel barons with whom he met at Runnymede), it's also considered significant because it's the 1217 text that became English law.  Issued one year after King John's death by his son and successor, King Henry III (who was just 9 years of age when he ascended to the throne), the 1217 Magna Carta bears the seals of the Earl of Pembroke (William Marshal) and Cardinal Guala Bicchieri (papal legate), the young king's regents at the time.


If truth be told, this symbol of liberty, justice and freedom of the individual actually is not all that visually impressive -- this from someone who's had the privilege of viewing both the 1215 version at the British Library (when it was housed at the British Museum) decades ago as well as Hereford Cathedral's 1217 version on the Hong Kong leg of its ongoing global tour.  Written in Latin using a surprisingly small as well as dense script, the Great Charter -- that was so-called to differentiate it from the smaller Charter of the Forest issued at the same time (regulating forest law) -- is big in physical size and text length compared to most other medieval charters but isn't all that large as well as is nigh impossible for modern readers like this blogger!


Consider its age, it probably will be expected that most of the Magna Carta's clauses have been repealed over the years and centuries (even while the Great Charter's spirit influenced such as the Universal Declaration of Human Rights of 1948).  At the same time, it's most illuminating to learn which of the Magna Carta's clauses have withstood the test of time.  Of these, two are specific to England, that which stipulate that: the Church in England shall be free; and the City of London and other boroughs have their rights and freedoms confirmed.

But the remaining others are ones that many contemporary societies, regardless of where they are located in the world, would do well to see applied.  I refer to those which stipulates that: no one shall be imprisoned or have their goods confiscated in any way be reduced except by lawful judgement in a proper court; and justice will not be sold, delayed or denied to anyone.  For without the adherence of these (and, effectively, the rule of law and condemnation of corruption), surely there won't be real justice in place?
Posted by YTSL at 3:16 PM