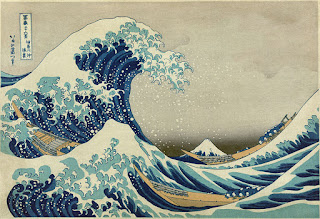 Miss Hokusai (Japan, 2015)
- Keiichi Hara, director
- Voice artists: Anne Higashide (nee Watanabe), Yutaka Matsushige, Shimizu Shion
The Japanese artist known by a variety of names, including Tetsuzo (to his family) and Hokusai (most famously), is responsible for a woodblock print with many names, including The Great Wave, The Wave and The Great Wave off Kanagawa, which is probably the best known Japanese, even non-Western, work of art in the world. An Edo-period denizen who lived to the grand old age of 88, he had two wives and fathered at least five children.

Miss Hokusai centers on the one daughter of the famous artist who was by her father's side when he passed away in 1849.  Oi (or O-Ei, as her name is spelt in this animated offering) also is the one child of Hokusai who is said to have worked on many of the creations that bear her father's signature as well as was recognized as an accomplished painter in her own right, with her depictions of women being considered superior to that of many of her (usually male) contemporaries.
Keiichi Hara's film begins in 1814, when O-Ei (voiced by Anne Higashide) was 23 years of age, and living and working alongside her father (voiced by Yutaka Matsushige) in separate lodgings in Edo (what Tokyo was then known as) from her mother and a younger, blind sister named O-Nao (voiced by Shimizu Shion).  Sharing the run-down quarters with the daughter and her father is another, less talented artist -- who appears to be in the picture mainly for comic relief -- and also occasionally in the frame appear others individuals, including Hatsuguro (Michitaka Tsutsui), a disciple of Hokusai on who O-Ei has a crush.
Miss Hokusai's story includes some personal drama, which mainly comes by way of Hokusai's relationship to his daughters, and O-Ei and O-Nao's relationship to each other.  The sub-plot involving O-Nao's blindness and Hokusai's reaction to it is one that's achingly sad while the way the two sisters interact is quite touching and can result in moments of beauty.
Still, there's no hiding from this anime coming most alive when the focus is on O-Ei and/or Hokusai and their artistic creations.  Story-wise, perhaps the most involving section of the film involves a painting created by O-Ei that gave a noblewoman such terrible nightmares that she's in danger of dying of fright (until Hokusai creatively intervenes), with another episode that's vividly rendered involving O-Ei and her efforts to capture a dragon on paper.
Appropriately for a work about a master artist and the daughter who came close to being his equal, Miss Hokusai is beautifully illustrated, with the detailed background scenes of old Edo's streets, buildings, bridges and main river being particularly impressive.  As with the works of Studio Ghibli (Japan's pre-emeninent anime studio), this Production I.G.-Animation Studio co-production contains images which would not be out of place if viewed in an art museum rather than a cinema.
Where the makers of Miss Hokusai stumble though is in their film's protagonist sometimes coming across as too emotionally detached to really move.  If she had been played by a live actress, I'd have said that the performer (who, by the way, is the daughter of Ken Watanabe) was too wooden.  As it stands though, my suggestion is that O-Ei wasn't expressively drawn enough; with the result that her father threatens to overshadow her in this movie as well as has been the case historically.