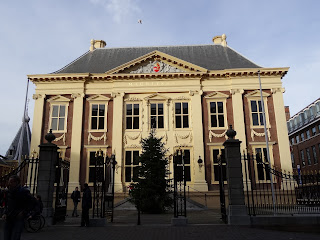 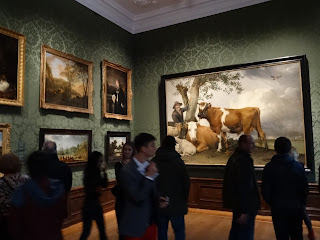 Some art works, like Paulus Potter's The Young Bull,
attract attention by way of their sheer size 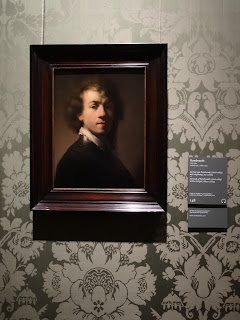 Others, like this Rembrandt self-portrait, catch the eye
through their sheer quality and/or the fame of their artist


Before I went to the Netherlands last December -- indeed, I'd go so far as to say as because I knew about it via Oeke Hoogendijk's informative documentary about the Rijksmuseum that I viewed at the 2015 Hong Kong International Film Festival -- I had heard about that wonderful Amsterdam art museum's recent reopening after being closed for renovation for what turned out to be a decade.  However, it wasn't until I started researching in earnest in advance of my Netherlands trip that I learnt that another grand old Dutch museum -- this one located over in The Hague -- also had recently been reopened again after a major refurbishment.

Even without knowing about this development, however, I figured that the Mauritshuis was one place that my German friend and I could not leave off the agenda the day that we went over to The Hague!  Easily reached by foot from the city's main train station, this particular art museum is situated in the heart of The Hague, next to the Dutch Parliament buildings and bordered by a moat-like manmade lake on two of its sides.  Named for the historic mansion's original owner, John Maurice, prince of Nassau-Siegen and -- for several years -- the Dutch governor of Brazil, the building was bought by the state in 1820 for the purpose of housing the Royal Cabinet of Paintings and opened to the public two years lat


Although there are a few sculptures and decorative art pieces to be found inside the Maurithuis, the museum that also bears the name is primarily known for its paintings by Dutch and Flemish masters of the Dutch Golden Age.  Like at Amsterdam's Rijksmuseum, the illustrious likes of Rembrandt, Rubens, Vermeer, Jacob van Ruisdael and Franz Hals are represented here; with Rembrandt's The Anatomy Lesson of Dr Nicolaes Tulp, and Vermeer's Girl with a Pearl Earring among the collection's most famous masterpieces.

It also was at this intimate-feeling museum in The Hague that I was re-acquainted -- via their works -- with Hans Holbein (the Younger) and Anthony van Dyck: two continental artists known as much -- if not more -- for their paintings of English monarchs and aristocrats than their own countrymen (and -women); a number of whose works I'd seen hanging in various museums and stately homes in England (where, it might be said, my art historical leanings and education began some decades ago).

At the risk of sounding facetious, I very much doubt that those noble individuals who sat for their paintings by such master artists ever imagined that their portraits would one day hang on the walls of a museological institution that also prominently features a monumental painting of a young bull -- but such is indeed the case over at the Mauritshuis!

On a visitor note: I found it interesting that whereas such as the Rijksmuseum and Van Gogh Museum over in Amsterdam had attracted a number of mainland Chinese visitors (of a decidedly different type -- and caliber? -- of those who head over to Hong Kong these days), the majority of Asian visitors to the Mauritshuis looked to hail from Japan.

On a related note: there did noticeably appear to be fewer tourists about in The Hague in general than over in Amsterdam.  This being said, my German friend and I noticed that at the Mauritshuis, as with the Rijksmuseum, long queues formed to await entry into the museum(s) in the afternoon -- whereas when we got there in the morning, these institutions actually appeared pretty empty of other people! ;b
Posted by YTSL at 11:59 PM