Hong Kong, where 360 degree views of nature can be fairly easily found! 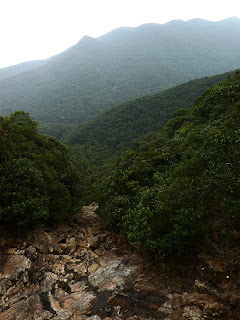 Even on a hazy day, parts of Hong Kong
can look lovely and pretty green 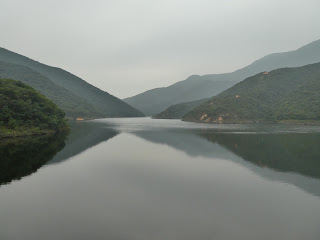 Does this look like a dreamscape to you?
A few years back, I had quite the heated argument with an Australian man who's lived in Hong Kong for quite some time but seems to know about -- or have seen so little of -- it.  In a nutshell, he absolutely refused to believe me when I stated that there are parts of Hong Kong where you have 360 degree views which don't include the sight of a single building and there was no way I was backing down from what I've personally observed to be the case on so many hikes in the Big Lychee.
Call me petty but every once in a while, to this day, I think back to my dispute with that ignorant prat; and this particularly when I'm out hiking and am in a green part of the Hong Kong countryside where not a single man-made structure, never mind building, can be seen.  What may be the most amazing thing of all is that such places can be found not just far into the New Territories but Hong Kong Island, a 78.59 square kilometer area that's home to, as of 2011, an estimated 1.27 million people!
As improbable as it may seem, I guess that if one is not a hiker, one will not realize that there are huge chunks of unpopulated space in the center of Hong Kong Island and that Hong Kong Island is home to not just one but six of Hong Kong's twenty-four country parks.  And even while there are parts of the territory that most definitely resembles a concrete jungle, it also is the case that approximately three quarters of Hong Kong is countryside rather than (ultra) urban!
Consequently, it's not only pretty easy -- once you know where to go -- to get away from the madding crowd in Hong Kong but into areas where pretty butterflies and other wild critters (including wild boar even) are far more likely to be seen than a three-storey village house, forget high rise building.  And for the record: among some of my favorite spots where 360 degree views of nature can be found are a section of Hong Kong Island's Violet Hill that's notable for almost always being windy, the scenic Luk Wu Plateau over in the Sai Kung Peninsula and along Po Toi's well-named "Rugged Trail". :)
Posted by YTSL at 11:39 PM

Ugh..... Maybe your friend had to go out and see it for himself sometime. Might have to go on a weekday to avoid bumping into crowds along the way though.

That man is definitely NOT someone I'd consider a friend and I'd doubt that he'd be bothered to do much hiking. Pretty ironic, considering that he lives in Sai Kung, right?!

As for weekend crowds: I find that once you go beyond well known trails such as Dragon's Back, things really aren't that bad still... ;)