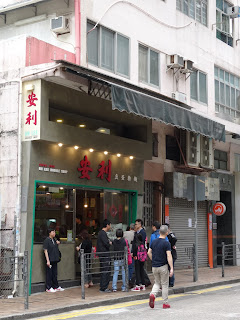 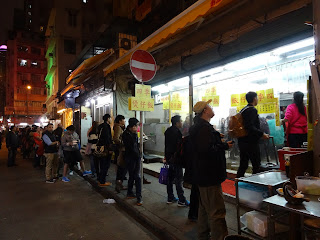 The wait is usually even longer at the Four Seasons
claypot rice eatery in Yau Ma Tei! :O
On my most recent visit to Tokyo's Tsukiji market back in May of last year, I took one look at the line outside my favorite sushi restaurant there -- the very one were I had had an absolutely revelatory omakase meal back in 2006 -- and decided that I just wasn't willing to stand in line for the hours I estimated I'd need to do so in order to get through its door to get what I knew would be an extremely good value as well as quality sushi breakfast.  Here's the thing: the most recent time that I had eaten at Sushi Dai (back in 2012), I had waited approximately two and a half hours to get into that tiny Tsukiji sushi-ya; but four years later, the lines to get into it were the longest yet that I had ever seen!

Until I moved to Hong Kong close to 10 years ago now, there had only been one place I remember being happy to stand in line for its food.  This was Koch's Deli in West Philadelphia, whose generously sized sandwiches -- which I actually usually could get two meals out -- had far more inches of meat than bread and where the staff would hand out free slices of meat and cheese to people who they had been waiting a while to place their orders, and also habitually also offered up a joke per order.  (More than incidentally, Sushi Dai's own thoughtful gestures involved handing out free cups of green tea to people waiting in line and even giving them umbrellas to use if it was raining!)

What with the Big Lychee having lots of super popular but physically small eateries where reservations are not entertained and sometimes just plain unheard of, waiting outside to get into a place for lunch or dinner has become a pretty common part of my life here.  Still, it must be said that I've never waited more than one and a half hours -- one hour less than it took me to get into Sushi Dai on my third and my most recent visit there -- to get into a place here in Hong Kong.

As it so happens, the restaurants where I've probably spent the most time waiting to get into in Hong Kong also are sushi-ya: specifically, branches of the Sen-ryo kaiten sushi chain whose parent shop is located in Japan's Tochigi Prefecture (and is several levels above other kaiten sushi restaurants here in Hong Kong, including its Genki Sushi budget affiliate).  About the only time when I could regularly walk into a branch of Sen-ryo was in the first few months after the Fukushima disaster of March 2011  and fears of radiation and such caused Hong Kongers to stay away in droves from their favorite Japanese restaurants.

I actually have friends (including one local Hong Konger) who refuse to wait to get into a restaurant, reasoning that there are so many restaurants in Hong Kong that one might as well go off in search of a good one without a line rather than waste time waiting in line to get into a particular dining establishment.  My problem though is that every once so often, I get specific cravings for the food made at a particular place -- and it's at these select eateries that I am willing to stand in line to get into, and often go do so equipped with a magazine or book to read while I'm waiting!

Among the handful of places outside whose doors I've been willing to wait for an hour (or even a little more!) are: For Kee, whose pork chops are marinated in a sauce that's absolutely heavenly and go ever so well with rice; Sing Heung Yuen, whose wickedly good tomato broth I invariably drink every last drop of; the Four Seasons claypot rice eatery whose standards have dropped somewhat in the last few years but whose extremely competitively-priced offerings still can hit the spot, especially on a cold night; and Yokozuna Ramen Restaurant in Yau Ma Tei, which was in existence long before the ramen wave hit Hong Kong and big name Japanese ramen chains like Ippudo and Ichiran set up branches on these shores.

And yes, I'm usually by myself when I wait in line since my particular food cravings don't tend to be shared by my friends -- or at least not to that strong a degree at the particular time that I have them!  But, to be honest, I don't mind so much as this means that when my plate or bowl of goodies finally arrives, I can devour them at a speed and in a manner I would feel embarassed to do so in front of (better mannered) people I know!! ;)
Posted by YTSL at 10:15 PM