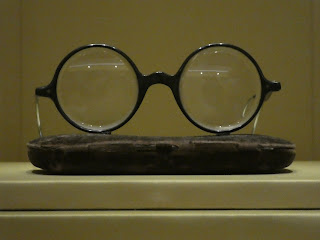 A pair of glasses worn by the last emperor of China 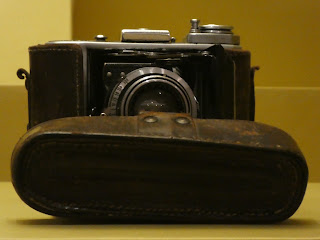 A camera (partly obscured by its strap)
that belonged to Puyi


In recent weeks, there has been much hue and cry about the announcement by Chief Secretary -- and presumed Chief Executive wanna-be -- Carrie Lam that a HK$3.5 billion Palace Museum will be established at the West Kowloon Cultural District to celebrate the 20th anniversary of Hong Kong's Handover to the People's Republic of China.  Questions have been asked as to whether she's using the Palace Museum deal to make a case for her suitability as 689's successor, with some people feeling affronted by her machinations even while others say that, regardless of her actions, let's ensure that some treasures from Beijing's (former) imperial palace(s) should end up in Hong Kong.


While this controversy rages, two special exhibitions featuring artifacts on loan from Mainland China which previously belonged to imperial personages are taking place in Hong Kong.  Over at the Hong Kong Heritage Museum, items from the Palace Museum are actually on show as part of the Ceremony and Celebration -- The Grand Weddings of the Qing Emperors special exhibition which opened on November 30th, 2016, and runs through to February 27th, 2017.  Then there's the From Son of Heaven to Commoner: Puyi, the Last Emperor of China special exhibition -- at the seemingly unlikely venue of the Hong Kong Museum of Coastal Defence -- which opened back in August 2016 and runs through to February 13th of this year.


One afternoon a couple of weeks ago, I made my way to the very cool museum housed in the grounds of what used to be Lei Yue Mun fort.  On previous visits, I had gone through the permanent exhibitions within the former Redoubt and also spend time exploring the museological institution's expansive grounds.  So this time around, I was intent on focusing on checking out the special exhibition on Puyi -- even while also spending a few minutes taking in the stunning panoramic vistas that are particularly awe-inspiring on a beautiful high visibility day like the ones we've actually had a few of this winter.


With exhibits occupying five of the museum's permanent galleries, the From Son of Heaven to Commoner special exhibition was actually more ambitious and extensive than I expected that it would be.  And while many of the items on display -- including a pair of spectacles previously worn by Puyi, a camera and other Western inventions which fascinated the technophile and, most humbly, the utensils he used when he was an inmate at a center for war criminals -- were not particularly amazing to behold in and of themselves, their connections to a man who led a life so extraordinary that if his story had been invented, no one would have believed that it was true, makes it so that they themselves have significant historical value.


For someone not particularly familiar with the details of Puyi's life (and first learnt his name from viewing Bernardo Bertolucci's not always historically accurate The Last Emperor years ago), the exhibition at times threatened to give me a case of information overload.  Thanks to an excellent documentary shown in two parts at the museum's theater though, I was able to fit things together and more coherently figure out the story of Puyi's incredible life, which saw him go from virtual god to deposed monarch before the age of four to political puppet, then prisoner and, ultimately, lowly commoner in a communist state in around just six decades!


Adding to the surrealness of it all was that the museum also had made available both replicas of Puyi's imperial robes and inmate's uniform for visitors to wear and be photographed in them!  As might be expected, I saw several people -- female as well as male, adults as well as children -- choose to put on and pose in the replicas of Puyi's imperial robes but not a single soul electing to dress "up" in the replica inmate's uniform.

If I were to be cynical and mean-spirited, I'd be moved to wonder how many museum visitors actually came away with an appreciation of the ironies and such that the story of Puyi is full of.  But if I were to take the "half full glass" perspective, then I will point out that certain details or sections of this singular historical personality's life definitely did seem to fascinate many of the visitors and that they seemed willing to literally put themselves into his clothing for a few moments -- and thus maybe also figuratively into his shoes!
Posted by YTSL at 10:16 PM

Isn't it amazing how camera change. I have quite a few old photos (Tin Types) of family members.
Also my grandpa Clarence Camera.
Coffee is on

Definitely re the major changes that cameras have undergone, especially in recent years. I remember having a camera with a cartridge, then ones which you had to insert film reels into, and also Polaroid cameras. And, actually, I only made the switch to digital cameras about 10 years ago! What about you?

This is a good example of your site at its best. The text is informative in itself, but you also provide links which enhance your main entry. The Coastal Defence and Heritage Museums illustrate Hong Kong's historical and cultural depth.

Also, your link to Bertolucci's The Last Emperor, regardless of its historical inaccuracies, was for many of us an introduction to Pu Yi and the time in which he lived. Shortly after viewing this film, way back when, I took a trip to Asia. When I viewed the collections in Taipei's Palace Museum, I visited Beijing's Forbidden City later in my trip.

As I walked past the many rooms, I imagined what some of the artifacts from Taipei's Palace Museum would look like inside the Forbidden City...Roaming through the maze of alleyways, I recalled Ryuichi Sakamoto's music from the Last Emperor. At the same time, the performance of Ying Ruocheng (the late actor-director-playwright-translator) as the governor of Pu Yi's detention camp, dominated my thoughts. Somehow he came to symbolize the good people who became victims of the fanatical ideology of the times. It became an emotional experience for me surrounded by so much history.

I hope I'm not being too self-indulgent with these comments, but your blog was a catalyst that recalled a time when travel, history, architecture, and movies - all seemed to converge into one emotional experience for me.

Thanks for the compliments about my blog and also for sharing your memories, etc.! It's funny you mentioned imagining how the artifacts in Taipei's Palace Museum would look like inside the Forbidden City as I had visited those two places in reverse order from you and spent time imagining how certain rooms in the Forbidden City would look like with artifacts that I knew were over in Taiwan, etc.! :)

Speaking of Bertolucci's film: I had the privilege my first year in Hong Kong of interviewing Lisa Lu, who played the Empress Dowager in that movie (along with a few Shaw Brothers productions and at least one play). Among other things, she told me how she had told Bertolucci that some of the things he wanted in the film were historically and/or culturally inaccurate. E.g., he had the Empress Dowager being transported on a moving throne despite her telling him the throne is not supposed to move because doing it is a sign of instability. What a pity he didn't listen (more) to her. Honestly, I got the distinct impression that I was talking to someone really knowledgeable and wise as well as very nice.