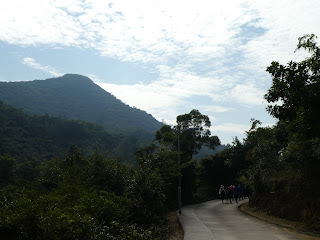 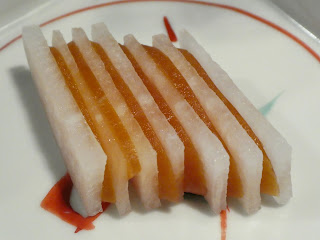 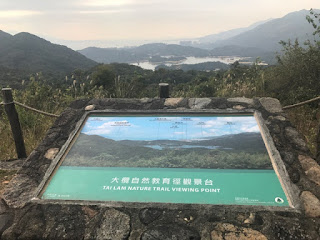 View from a scenic lookout point in Tai Lam
Country Park this afternoon :)
Some time ago, I gave myself three weekly goals geared at making myself physically and psychologically healthier.  One of these involves trying out at least two new restaurants or bars a week in order to make sure that I don't get prematurely set in my habits and ways.  A second has me trying to walk an average of 10,000 steps each day (and yes, the idea is to do this outdoors for the most part rather than in, say, a gym or shopping mall!).  And the third is geared towards getting this person who can be prone to hermit tendencies to be more social and spend time with friends at least three times a week.
Rather unusually this week, my first goal was achieved before Wednesday had come along -- as I had my first ever -- but hopefully not last -- lunch at The Chairman with my cousins and two friends on Monday, then went for what turned out to be a nice drink and but over-priced dinner at Little Creatures after a badminton session in Kennedy Town with two other friends on Tuesday evening. And as it turned out, this weekend also has seen me being pretty physically and socially active; what with my having taken part in another beach clean-up early on Saturday, going and ringing in the new year once again at Sake Bar Ginn, and then hiking along the Tai Lam Nature Trail with yet another friend earlier today!
While I'm not given to making New Year's resolutions, I do reckon that it'd be great if I can keep fulfilling those three stated weekly goals as I do feel that carrying them out has done me quite a bit of good thus far.  And should anyone wonder: I clocked over 16,000 steps on my pedometer yesterday and close to 20,700 steps today!
Oh, and since this is a New Year's Day post, here's going ahead and wishing this blog's readers a happy 2017.  In addition, here's registering my sincere hope that this year will be far less politically tumultous and troubled as well as socio-economically divisive for Hong Kong and the world at large than 2016 was!
Posted by YTSL at 11:08 PM