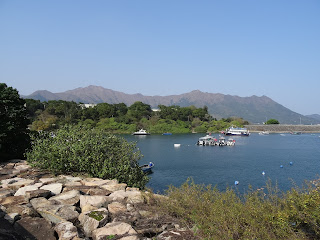 The kind of views that I enjoyed over the course of
my favorite outdoor outing in Hong Kong in 2016 :) 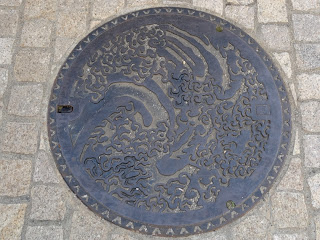 
As far as world affairs went, 2016 was one of the, if not worst, then shocking, years in living memory because of such as Brexit and Donald Trump triumphing in the US presidential elections.  And it's been a horror show on the political front at times in Hong Kong too.


However, last year was actually a generally good year for me at the personal level, with many highlights of various kinds.  (Among other things, I think I had at least 10 meals I had in 2016 which I'd rank very highly: as in even consider them to be among the best I've ever had in my life!)  Consequently, my 10 highlights list for 2016 was difficult to compile: not because there was a dearth of choices but, rather, due to it being very much the opposite!


Best Bar: Considering how often Sake Bar Ginn gets mentioned on this blog (e.g., in entries such as this and this), it'd seem that there really is no contest in this category.  At the same time though, I have to admit to thinking that if Sasagin were located in Tokyo rather than Hong Kong, things actually might be different.  But since it's not, Sake Bar Ginn is not only where I go whenever I like to spend an evening drinking some very good sake but also where I've spent some truly wonderful evenings with good friends, including, in 2016, that which saw us celebrating my birthday when midnight came along!


Best Book: In 2015, I read a review of Janice P. Nimura's Daughters of the Samurai in the New York Times that had me scouring bookshops for months for a copy to no avail.  So when I finally saw this non-fiction work about three Japanese women who had been sent when young to be educated in the USA back in 1871(!) at the Shinjuku branch of Kinokuniya where I've come across many wonderful tomes, I snapped up a copy even though it was in hardback rather than paperback (which I prefer because it's just more comfortable to read in bed with as well as generally cheaper!).  An utterly riveting read with sections that can seem stranger than fiction, it is a fine tribute to those three women and, to my mind, is full of stories that are simply crying out to be made into a fantastic film!


Best Celebrity Encounter: Without a doubt, this involved Funassyi, the super-energetic Pear (fairy) with a heart of gold.  One incredible day in July, I managed to attend not just one but two meet-and- greet sessions with Funassyi in Hong Kong during which I not only got to see with my very own eyes how amazing the unofficial mascot of Funabashi is at delighting its fans and hear with my own ears the enthusiastic response it engenders but also got highfived by it! :)))))


Best Concert: It's now the Orquesta Bueno Vista Social Club since some of the original members of the Bueno Vista Social Club that was the subject of Ry Cooder's lovely 1999 musical documentary are no longer with us.  But those members who remain, despite being pretty elderly -- and their younger associates -- still sure know how to make beautiful music and put on an absolutely marvelous show.  Their concert that was part of the 2016 Hong Kong Arts Festival was pretty incredible, and it made me very happy indeed that I managed to catch it with my mother on what actually was my mother's birthday. :)

Best Exhibition: I'm one of those lucky people who has seen masterpieces by Claude Monet in some of the world's greatest museums (including Paris' Musee d'Orsay, London's National Gallery and New York's Metropolitan Museum of Art).  Even so, I managed to enjoy the Claude Monet: Spirit of Place exhibition at the Hong Kong Heritage Museum.  Of course a large part of my pleasure was derived from viewing a number of the French Impressionist painter's works.  But I really also did very much like the creative use of interactive and multi-media on show in what may well be one of the most beautifully designed and well curated exhibitions I've seen in years.


Best Film: Have you ever viewed a movie which packs such an emotional climactic punch that you need to catch your breath and feel a physical, not just psychological, need to sit and watch the end credits roll?  It may not be an action film and its main stars are pretty elderly but Canadian-German co-production Remember takes its viewers on one incredible rollercoaster of an emotional ride -- and in the process, delivers the message that those who forget the past, even those who did so involuntarily, do so at their peril.

Best Meal: This was the category with the greatest competition.  In a year where I had several incredible lunches (including one at The Chairman and two at Lung King Heen as well as my favorite nasi campur place in Penang) and breakfasts (particularly those at the wonderful Gora-Kansuiro, whose dinners were to die for too!) as well as dinners, I really did partake of many delectable feasts.  But you know you've had a truly special meal when a two Michelin star chef sitting next to you opines that the restaurant where we're having a thoroughly delicious omakase sashimi and sushi dinner  -- for the record: Uehara -- deserves two Michelin stars too, at the very least!

Best Museum: In a town with a population of not more than 12,000, there is a terrific art museum that's home to hundreds, if not thousands, of masterpieces by a single artist.  It may seem improbable, unless the artist in question is Hokusai, who began painting at around 6 years of age and lived until he was 88 years old, several of which near the end of his life were spent in tiny Obuse.  Woodblock prints, paintings and even three-dimensional art created by Hokusai are to be found at Obuse's Hokusai Museum, which also offers up a series of wonderfully informative short films to watch before one gets to viewing the Edo era master artist's fine works.
Best Musician: The City Chamber Orchestra of Hong Kong has had some inspired choices of guest performers in recent years, including virtuoso percussionist Dame Evelyn Glennie and hilarious Dame Edna Everage.  But multiple Grammy award-winning double bassist Edgar Mayer may well top the lot in terms of thrilling the audience with his bravura skills, as he did at last November's Edgar Meyer + CCOHK concert.  In all honesty, I never knew that the double bass could "sing" the way he made it do, and reach the high notes that he made it reach.  All in all, his was a sensational performance which I feel utterly privileged to have been able to hear and see live -- and, actually, only just a few feet away from me as my visiting German friend and I had truly prime seats for the concert that evening!

Best Outdoor Outing: I went on 28 hikes in 2016; most of them in Hong Kong but also including one in Japan.  But, as it so happens, my favorite outdoor outing of last year didn't involve my going about on foot but, rather, by bicycle!  One lovely weather and super high visibility day, I rode a rented bicycle from Tai Mei Tuk to Luen Yick Fisherman Village and back.  Then, loathe to call it a day, I proceeded to bike across the Plover Cove Reservoir's dam a couple of times.  For yes, it really was that lovely and grand a day, the kind that gets you wishing it'd never end as well as has you remembering fondly for what I imagine will be many years to come! :)
Posted by YTSL at 11:59 PM

You seem to keep busy. Look forward seeing more of your blog.
Coffee is on

I think that people in Hong Kong do venture out from their homes far more than people in many other parts of the world -- and it shows in my blog, which I'm glad to hear you're planning to continue to follow in 2017! :)