See You Tomorrow promises more than it delivers (film review) 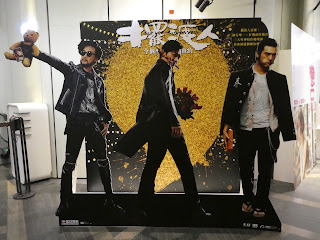 Eye-catching advertisement for a star-studded movie!
See You Tomorrow (Mainland China-Hong Kong, 2016)
- Zhang Jiajia director and co-scriptwriter (with Wong Kar Wai)
- Starring: Tony Leung Chiu Wai, Takeshi Kaneshiro, Eason Chan, Angelababy, Sandrine Pinna, Du Juan
Right after I emerged from the theatre where I had viewed See You Tomorrow, I made for a nearby video cum music store to look for a CD of the film's music -- and was surprised as well as disappointed to find that there doesn't appear to be such a thing (yet).  As you might have gathered from my actions, I thought this romantic movie's music was absolutely fantastic -- something I've come to expect of movies bearing Wong Kar Wai's imprint.  (And for the record: I own CDs of music from Ashes of Time, Chungking Express, Fallen Angels, In the Mood for Love, 2046 and even My Blueberry Nights!)
If only I felt so unequivocably positive about the rest of debutant director Zhang Jiajia's adaptation of his short story about three men who are charming in their own ways and their three very different romantic relationships with three very different women.  Billed as a comedy, See You Tomorrow's humor is so broad and general style is so over-the-top that I wouldn't have been surprised to learn that its source material was a comic book.  And while not as out-and-out wacky as another Wong Kar Wai produced-comedy, Jeff Lau's The Eagle Shooting Heroes, Zhang's 2016 offering and Lau's 1993 work do share some elements, including one main actor (in Tony Leung Chiu Wai), a photogenic, star-studded cast and also one funny-as-ever "sausage lips" gag!
Wong Kar Wai's hand -- or, at least, influence -- also is evident in this movie having visual flair and color aplenty, there being copious use of voiceover narration in the film, and a disinclination for story details to unfold in chronological order.  Furthermore, there's the choice of Wong Kar Wai favorite, Tony Leung Chiu Wai, to play the lead character: Chen Mo, the debonair owner of the See You Tomorrow bar who happens to be remarkably adept as a "ferryman" showing sad souls who've been ditched by their lovers the way back to an even keel, even if not always back on the path to true love; this despite or perhaps because he's lost in love himself, with the woman of his dreams (Du Juan seemingly channelling Brigitte Lin Ching Hsia) long gone from his life.
Another veteran of Wong Kar Wai movies, Takeshi Kaneshiro, has the role of Guan Chun, Chen Mo's eccentric landlord who lost his heart years ago to Mao Mao (Sandrine Pinna), a tomboyish pancake maker with a massive case of amnesia, and consequently no memory of Guan Chun and their romantic relationship.  To the Taiwanese pair (who, more than incidentally, have a 14 year age difference) falls the bulk of the responsibility to elicit laughs through physical comedy -- that sometimes works but other times ends up feeling far too lame -- even though their story also does have sad strands to it.
Probably the least Wong Kar Wai feeling story in this film is that involving radio deejay Xiao Yu (Angelababy), who lives next door to the See You Tomorrow bar, and fiercely independent rock singer Ma Li (Cantopop megastar Eason Chan), whose first visit to the bar proves to be pretty disastrous.  After he is dumped by the woman he loved (Lynn Hung), Xiao Yu -- who has idolized Ma Li from way back when he was way more boyish and handsome (and played in the movie by baby-faced K-pop idol Lu Han!) -- decides to learn ferryman techniques from Chen Mo in order to help Ma Li to heal and be happy again.
In view of its protagonist being a bar owner and much of the movie's action taking place in bars, it is only to be expected that See You Tomorrow will have lots of scenes featuring people drinking, sometimes in order to drown their romantic sorrows.  Nonetheless, the amount of alcohol shown being (supposedly) consumed in this film really is too much: to the extent that it truly borders on the ridiculously irresponsible as well as just looks -- yes, this is from someone who likes to taste her drinks! -- so terribly wasteful!  It might be a strange criticism, I know, but I honestly feel that the "bar golf" drinking scenes, in particular, went on for way too long and were so generally over-excessive that they consequently were unentertaining.

A more conventional slam is that See You Tomorrow misuses the talents of its main cast, with some seemingly tasked with over-acting like crazy while others had characters so low-key that they often didn't have much room at all to make use of their dramatic abilities.  Perhaps Zhang Jiajia needed to spend more time padding his short story into an over two hour length movie.  In fairness though, the first time director also looked to have put in quite a bit of effort to make the film look and sound good; and on these technical levels, he (and his team, who include cinematographers Peter Pao and Cao Wu) generally did succeed (although I, for one, could have done without such as the romantic shadowplay which worked so much better -- because it felt innovatively original then -- in 1991's Once Upon a Time in China!).
My rating for this film: 6.5
Posted by YTSL at 11:59 PM

With this entry you describe very well what it's like to view a movie and then to get a "rush" to go buy a cd of the soundtrack - even if the movie itself isn't that stellar. Of the movies you mention in the text, I own dvd's (not cd's) of Chungking Express, In The Mood for Love, and 2046 and like the music in those films, especially the last two because Shigeru Umebayashi one of my favorite composers, wrote the music. I recently bought a cd of his score for House of Flying Daggers and play it quite often.

I have two DVDs of "Ashes of Time" along with one of "Chungking Express". Also have VHS tapes (but no longer a VHS tape player!) of those Wong Kar Wai movies along with those for "Fallen Angels", "Happy Together", and "In the Mood for Love". And the more I think about it, the more I should try to hunt down a CD of the music for "Happy Together" (though, as it currently stands, I do at least have a CD of Shirley Kwan crooning "Cucurrucucú Paloma"... ;)