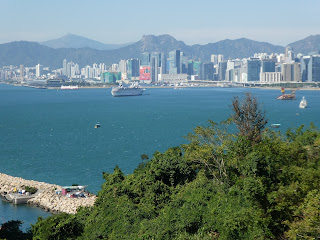 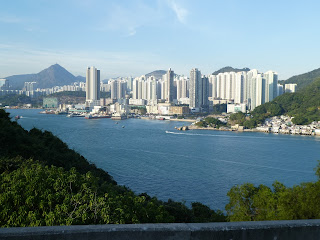 
Back in the summer of 2005, I made what remains my first and only visit to Mainland China.  After checking into our hotel in Beijing, I looked out of the windows in the room and saw that the sky was greyish orange in color rather than the usual blue.  Since it was the middle the afternoon rather than sunrise or sunset, I assumed that our room windows were tinted orange for some reason or other.  But when I walked outside some time later, I got to realizing that the sky really was that color -- and how bad air pollution in China can truly be!


Later on that same trip, I went and fulfilled a lifelong dream of walking along the Great Wall of China.  The thing though is that when I had envisioned being on that ancient series of fortifications once touted as the only man-made object visible from space, I had imagined that I would be able to see for miles rather than just a few hundred meters.  Consequently, the terrible air pollution encounter and the poor visibility it caused made it so that my experience of visiting that which many people consider to be one of the world's great wonders was actually rather overwhelming.

There's a part of me that feels regret that such as the polluted air found in Mainland China made my visits to Beijing and the Great Wall of China quite a bit less awesome than I had hoped would be the case.  There's also a part of me who feels ever so grateful that I don't live in that part of the world.  In addition, yet another part of me feels bad for those who do, and have to regularly breathe that foul air; and this especially after hearing that air pollution in Beijing and many other parts of Mainland China is far worse in the winter than summer months (as a result of such as an increased use of coal-fueled electricity to heat homes and offices).


At the same time though, since moving to the Big Lychee, I've come to realize that that unhealthy smog often doesn't just remain within Mainland China's borders but, rather, regularly blows across the border over to Hong Kong, Macau and South Korea, and has even blanketed Japan!  So when I read a couple of weeks or so ago that this winter has seen some 460 million people across northern China being affected by thick smog, I got to wondering how much of that air pollution would come over to Hong Kong, and when.


Today, I found out.  Actually, more precisely, I read yesterday afternoon that changing winds were going to be sending Mainland China's dreaded smog over to Hong Kong -- and so it proved.  To give people not in Hong Kong an idea of how bad it was/is: I decided against going out hiking today, like I normally would on a Sunday; and, probably because I couldn't resist going out anyway -- to check out a special exhibition at Hong Kong U's University Museum and Art Gallery and do some exploring by foot of the neighboring areas -- ended up with a headache that I've subsequently felt a need to take some Ibuprofen for!

Ironically, just yesterday, I had been discussing Hong Kong's air pollution with a couple from Germany and had remarked that things had seemed to be getting better recently -- citing among other things that this winter has seen a good number of blue sky days rather than the more usual gray ones that I've come to expect of this time of the year.  In addition, on the late December day that I had been to the Hong Kong Museum of Coastal Defence for the Puyi special exhibition, visibility had been on the remarkably high side for a winter's day!

As I have opined before on this blog, beautiful skies should not be uncommon sights in Hong Kong.  And with each passing day, month and year, I really do wish that polluters here and the millions more over in Mainland China would clean up their act, and get to thinking that surely they too would prefer to breath clean(er) air (and, while we're at it, have their waters, beaches and such be less polluted too)?!
Posted by YTSL at 11:09 PM

We don't have city smog. But during the forest fire season when one can't see the sun. The sky is has orange tint.
Coffee is on

The forest fire season sounds dangerous! Hope it's not too long as well as not too damaging!