Old Hong Kong post boxes and their continued use 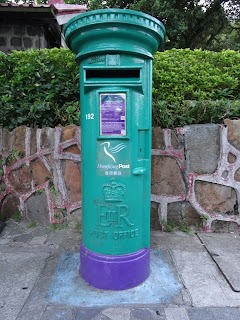 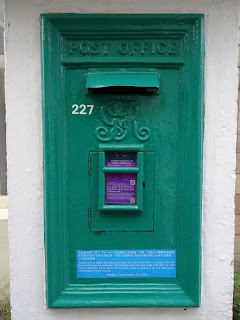 An even older colonial era post box; this one bearing the
cypher of King George VI, not Queen Elizabeth II!
Back in October 2015, the Hong Kong postal authorities announced plans to cover the British insignia on post boxes erected during colonial times that remained in use years after Hong Kong was handed back to China by Britain.  Apparently it just wasn't enough to repaint them green after 1997 as opposed to their original pillar box red.  (More than incidentally, post boxes in Malaysia also underwent a color change from pillar box red -- this time to yellow -- in the post-colonial era.)
The reasons given by the Hong Kong authorities for wanting to remove the British insignias included some people being uncertain and confused as to whether the old post boxes are actually still in use. But irate conservationists and heritage activists look to have managed to cause an about face by the powers that be, or at least a delay in their actions, since it's now 2017 and I still see a number of these post boxes -- which date back not only to the reign of Queen Elizabeth II but also her father, King George VI, and his father, King George V -- with their royal insignia intact in various parts of the Big Lychee!
More than incidentally, I wonder how much mail actually does get collected from Hong Kong's post boxes each day these days.  Put another way: are there people out there still who send that much "snail mail" any more in an era when such as gas, electricity and water bills can be paid online, via ATMs and such rather than just with a check through the mail?
On a related note: last month, I sent off two postcards by "snail mail" -- one to a friend who likes sending and getting them, and another to a certain Pear (fairy) who hails from Funabashi!  When writing out those postcards, I found that my writing hand cramping midway through -- a sure sign that I am so out of practice in terms of actually writing paragraphs worth of words rather than typing them out on my computer keyboard, as has become the norm as well as very much my preference for many years now! ;O
Posted by YTSL at 11:22 PM

Our postal boxes haven't change much. It would be interesting to see how postal boxes change over the tears.
I'm on postal route and my mail get delivered in box beside the road.

I have to say that I very much prefer the design of the old post boxes here in Hong Kong to the new ones that I feel lack character. And for the record: I'm talking here about the boxes one puts mail in to get delivered, rather than the boxes one gets one's mail in -- though, actually, it also tends to be so in that case that the older ones look more interesting!

I laughed when I read your comment about your hand cramping while writing postcards. Awhile ago at work I decided to post a hand written sign rather than a computer generated one or one made by our graphic designer. Both my cursive and hand printed sign looked bad so I asked around for the name of a staff member who still could write or print a legible sign. It took me awhile to find someone.

It's so strange, isn't it, that something we used to do so much of can now feel so very hard as well as be uncommon to do? I also think of all those times and hours I spent using a manual typewriter (and even had calluses on my finger tips to prove it). I wonder whether anyone uses those machines any more!