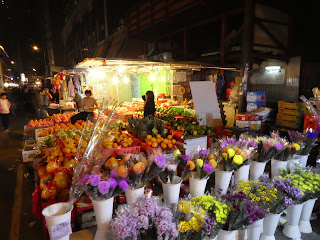 Chinese New Year essentials on sale at the local market 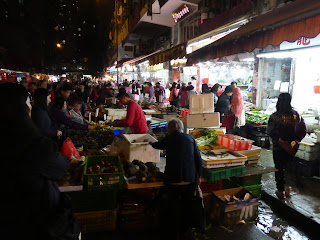 There's plenty of room too for the regular staples,
especially if the stalls get to flow out into the street ;) 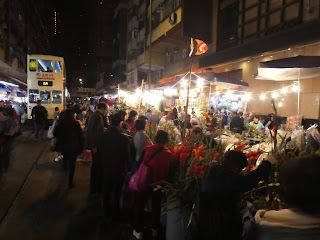 And yes, it's crowded but there's still room
for trams to pass by from time to time! ;b
Earlier today, I passed by Victoria Park and, upon seeing how packed it looked, counted my lucky stars that the crowd was considerably thinner when I went and checked out this year's lunar new year flower market earlier in the week.  As a friend of mine observed, the closer one gets to Chinese New Year, the more people will flock over to those festive markets.
But even while I've heard that major bargains are indeed to be had in the last few hours before Chinese New Year comes along, a claustrophic fear of getting crushed by my fellow humans makes it so that I will never be able to personally verify this being the case!  Also, I get the feeling that it's very likely too that many people get caught in a buying frenzy and end up making purchases that, in the cold light of day, they'll realize was actually unneccesary and maybe even not particularly wise!
Even at the regular wet market this evening, the shopping seemed on the manic side.  What with it being just one day before Chinese New Year's eve dinner comes along, people were out in force to get the necessary ingredients for what some families consider to be the most important meal of the year to have together as well as Chinese New Year essentials including auspicious flowers, plants, other decorations and foodstuffs (including fruits).
And what with it being less than 36 hours before the dawning of the first day of Chinese New Year, the usual rules look to have been relaxed so that the wares at regular stalls were allowed to spill onto the sidewalks and into the street itself, and other folks were able to set up temporary stands here and there.  At the same time though, it was clear enough that the trams would still be running through the middle of the road.  And while some people did feel at liberty to walk in that space in the intervals during which no "ding ding" could be seen or heard, whenever a tram rounded the corner and into this market street, the crowd would part for it to go through pretty much unimpeded.

For those who are wondering: there are a number of street markets within walking distance of the tram route on Hong Kong Island but there's just one wet market whose stalls are located on both sides of a street that the trams regularly pass along.  Chun Yeung Street is the market in question and, as you can imagine, it's featured in a number of Hong Kong movies (including Soi Cheang's Accident) and is one of those locations in the Big Lychee that makes me feel like I'm in a movie -- or, at least, a movie set -- whenever I am in the area, even if it really is just to shop for fruits and vegetables of the pretty mundane kind! ;b
Posted by YTSL at 8:35 PM

So how are you celebrating New Year's this s year? A hike with friends, a special dinner with friends??? Nosey readers want to know.

Since Chinese New Year goes on for 15 days, I'll be doing a number of things -- some of which I'll blog about! Will say for now though that at least one hike is indeed planned along with such as some Chinese New Year movie viewing. ;)