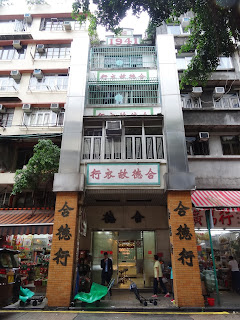 A rare Hong Kong tong lau that dates back to 1941! 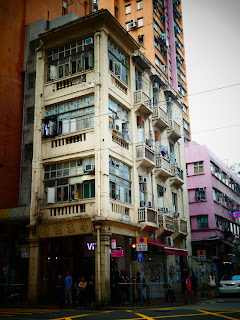 
For most of the time that I've been in Hong Kong, I lived in the kind of building which many Hong Kongers don't much care for and even look down upon.  Yes, they tend to be over 50 years old and lack elevators and, more often than not, security guards and letter boxes that are large enough to fit small parcels into too.  But I really do have a soft spot for tong lau, think they have lots of character as well as find them visually attractive.  And after living in buildings that were over a century old in the USA as well as the UK, I honestly didn't think that they're all that ancient!


Sometimes referred to as tenements, tong lau are more accurately collectively described as walk-ups and/or shophouses.  And those among them that were built before the Second World War, with their outer columns and what I haven't measured but am going to assume are five foot ways, remind me of the many traditional shophouses that remain to be found in my home state's UNESCO World Heritage-listed capital of George Town and other long urbanized sections of Penang.


While strolling about Sai Ying Pun a few months ago, I was surprised to find a tong lau at 153 Queen's Road West that dates all the way back to 1941 that's still in existence and very much operational.  A four-storey building that looks to house apartments on its upper floors and an old school jewellery store on its British ground floor (i.e.., American and Chinese first floor). it's notable for having its date of construction emblazoned on its top section and the Chinese "double happiness" character frequently associated with marriages but which I guess can be a generic auspicious blessing.  Hopefully, its good luck will continue and the building will remain an area landmark for a long time to come!


Not too far away, and over at 207 Des Voeux Road West, lies another old four-storey high tong lau whose ground floor used to house a Chinese rice winery but now looks to be occupied by a clothes store.  As for its upper floors: two of them look to house small sub-divided flats or, worse, cubicles of the kind that seem like they belong to a past era but, sadly, are still about all that some people can afford in a territory whose property market can appear to have gone mad.


I'm not sure if it's much or any consolation for its residents -- but since it's actually the rare remaining tong lau around that's located on a street corner, the building's interior should be brighter than many others of its ilk since it has windows on one extra side.  However, with its top floor windows bearing the dreaded "X" mark signalling that its space is no longer occupied, I wonder how much longer this particular building -- which definitely looks run-down but which I still find visually appealing -- will be around.

To my mind, this pre-World War II structure is a candidate that's ripe for renovation, restoration and/or conservation.  But (most) Hong Kongers' views of heritage buildings being what they are, I wouldn't be surprised to see it get demolished before too long, as has been the case with many others before it.  Still, one can but hope that it will get treated with some respect.  Who knows, maybe it -- and the in-better-shape tong lau over on Queen's Road West -- will get heritage listed, then be better valued and appreciated somewhere down the road, as has been the case with such as the Blue House and complex that's now home to the Comix Home Base over in Wan Chai!
Posted by YTSL at 10:48 PM

These old tong lau in your photos have a distinct character which really endears them to me. Wikipedia has a good listing of tong lau in Hong Kong. I hope that at least some will survive demolition...Well, being from Penang, you would be quite familiar with the historical value of shophouses.

There are more tong lau in Hong Kong than listed in Wikipedia. Hopefully that will stay the case for some time to come!