Midnight Diner 2 is the cinematic equivalent of a delicious bowl of warm, comforting soup (film review) 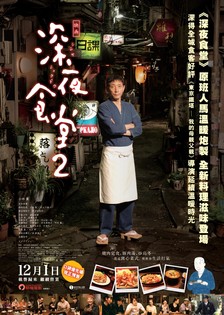 This time around, it took a viewing of Midnight Diner 2 to get me craving Japanese food again.  It's not that the dishes shown being cooked with heart and eaten with relish in this immensely enjoyable dramatic offering -- that's based on a popular manga series (by Yaro Abe), previously spawned a couple of TV series (in South Korea as well as Japan), and is the feature film sequel to 2015's Midnight Diner -- are especially stunning looking.  Still, they do look like the perfect comfort food to not only consume but also break bread with others over, drink with alcohol (be it beer or nihonshu) and generally make you feel warm all over as well as inside!

Actually, more than the food on show in the movie are the warm vibes that emanate from beholding the interactions of people who often don't have that much in common besides a tendency to seek emotional as well as physical sustenance late at night or the wee hours of the morning, and their finding it at a small shokudo open daily from midnight to 7 in the morning.  Run by a mysterious man with a scar on his face known as Master (who is portrayed to perfection by Kaoru Kabayashi in this film, its predecessor and -- I get the feeling although I haven't seen it -- the Japanese TV series), this atmospheric dining establishment can come across as the Japanese equivalent of the welcoming bar in classic American sit-com Cheers; albeit with better food and a more equal gender ratio among its similarly idiosyncratic regulars!

As with the first Midnight Diner, the structure of this feel-good movie is rather episodic and tells the stories of a number of characters who are drawn to and/or regularly frequent the Master's shokudo.  This time around, the film opens with an intriguing tale centering on a literary editor (Aoba Kawai) with a propensity to dress like a bereaved widow and crave to eat a hearty meat dish whenever she gets stressed before moving on to focus on an amiable elderly woman (Misako Watanabe) who journeys from her home in Kyushu to Tokyo after getting a phone call from a man claiming to be her son and then a mother cum soba restaurant operator (Midoriko Kimura) whose young adult son (Sosuke Ikematsu) follows a path in life that's greatly at odds with her wishes.

As the proverbial saying goes, it's not the destination but the journey that matters.  This is a sentiment that the makers of Midnight Diner 2 (and its related works) fully subscribe to.  So even while those three women's stories do power the film along a certain trajectory, it's often the interactions they have with Master, various of his physically modest establishment's regulars (who generally get along pretty well despite running the gamut from tight-lipped yakuza to aging transvestites to matronly -- but still often formidable -- working women, and who now include the endearing young woman (Mikako Tabe) who had run away from her rural home to the big city in the first film!) and also the kind of  cops one rarely sees in crime dramas (one of whom mans the neighborhood koban and is played by Joe Odagiri) that end up seeming to matter most.

About as wide-ranging as the types of personalities found in the movie are the emotions that it elicits.  While Midnight Diner 2 is generally light fare, with hilariously absurdist moments that had me laughing out loud, there most assuredly also were a few moments that left lumps in my throat and at least one super bitter-sweet scene that got tears streaming down my face.

At the same time though, Midnight Diner 2's world is one where, even when bad things sometimes happen to good people, it never feels like all is lost.  One big reason is that all of the characters have people who, at the very least, enjoy their company and, you also feel, do care for them.  And, actually, rather novelly, those compassionate souls who are willing to provide comforting friendship and help to folks who they actually may not know that well are those whose main connection to the person in need sometimes stems from nothing more than their being patrons of the same cozy diner -- which can simultaneously feel like an uncommon gem but also the kind of agreeable place that one will be able to find if one looks hard enough when in Japan!