Kawaii vehicles whose sight made me do a double take! ;) 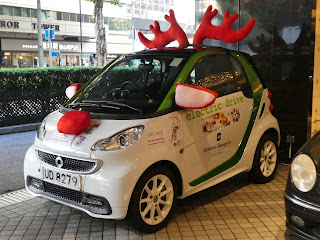 The kind of car decorations that one can see
in Hong Kong around Christmas time ;) 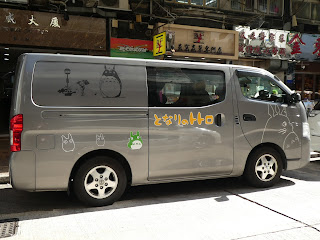 Not a cat bus but fans of My Neighbor Totoro
still will approve of this vehicle :) 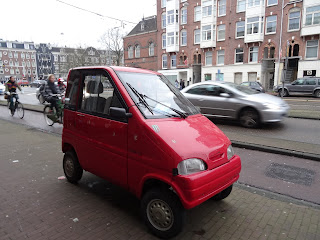 A surprisingly common sight on the roads of Amsterdam!


More than ten years ago now, I lived in a city which seemed impossible to (fairly efficiently) get around without either driving one's own car or -- more dangerously -- riding a motorcycle.  Although I've long been a far bigger fan of public transportation rather than private vehicles, even I succumbed to having a car during my time in Kuala Lumpur.


But I never ever became a car enthusiast like quite a few people I knew there, and to this day, am not likely to have my head turned by such as the expensive luxury cars and sports cars that some people can get super excited about, and which one often sees on the roads of Hong Kong.  Instead, the vehicles that tend to grab my attention are those that are on the kawaii side, be it because they are on the unusually small side -- as was the case with the Canta cars I saw when I visited the Netherlands around a year ago that make Smart Cars look big! -- or have cute decorations on them.


A few months back, a post on the invaluable We Love Funassyi blog alerted me to the existence of an amazingly Funassyi-fied car here in Hong Kong.  Sadly, although I've tried to keep a look out for the customized Suzuki Hustler, I've yet to spot it speeding around on the roads of the Big Lychee.  On the other hand, however, I've definitely seen my share of Hello Kitty-fied vehicles about here in Hong Kong, including cars, vans and even trams.  And a few weeks ago, I came across a van on a Shau Kei Wan street that marked out its owner as a big fan of Totoro!

Also bringing a smile to face was the sight of a car that's part of the Kowloon Shangri-La's stable which was festively festooned with horns and a red nose that brought to mind Rudolf the Reindeer.  Some may cry "Bah humbug" over it but my feeling is that its appearance did add at least a bit of Christmas cheer into the lives of some (easily amused) people as well as cause a number of folks to do a double take! ;)
Posted by YTSL at 10:14 PM