Caught in anthropological webs of significance to this day ;) 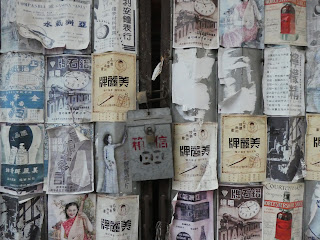 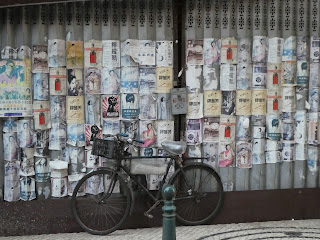 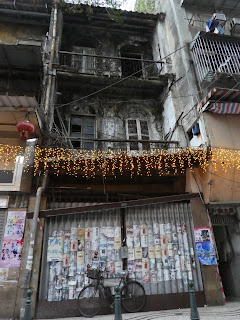 But after looking up and seeing the state
of the building that it fronts, I think not! ;b
In what can seem like another lifetime, I studied anthropology and even thought for a time that I'd be a professional participant-observer for pretty much my whole life.  But while I've long left the groves of academe and feel obliged to confess to not having read -- or even re-read -- a serious anthropology tome for quite a few years now, I actually do believe that quite a bit of what I previously learnt from, and of, that humanistic social science has continued to stay with me.
For one thing, anthropology has made me see that race is not a biological fact but, instead, a socio-cultural construct, and this idea has very much affected the way I see the world and humanity in general, and interact with my fellow humans.  For another, it's given me the tools to feel at home in societies and cultures in which I wasn't born, and also ones to help me more deeply -- and sometimes also dispassionately -- analyze them as well as those into which I grew up in.  In so doing, I sometimes am able to see problems where others may not, but also appreciate -- and sometimes, even plain notice, and see interesting things in -- a lot of sociocultural elements that others don't.
For better or worse, this sometimes can make me feel different from people around me.  On a lighter note: my anthropological knowledge also can bring about moments, like earlier this evening, when I was watching Arrival, the cerebral sci-fi movie in which actress Amy Adams portrays a linguistics professor tasked with finding out how to communicate with mysterious aliens who have arrived on Earth, and her character and another discuss the Sapir-Whorf hypothesis -- and I got to getting the distinct feeling that I was the only person in the cinema who was familiar with it and even knew the full names of the two linguistic anthropologists it's named after!
And although I did blog about it years ago (and now belatedly realize that my blog's more than 10 years old after seeing how old that blog post now is!), I think it worth pointing out again that this very blog's title actually also has an anthropological connection: in that, it's inspired by a quote by the great cultural anthropologist Clifford Geertz that "Man is an animal suspended in webs of significance he himself has spun..." which I very much believe to be true. :)
Posted by YTSL at 10:58 PM

I find the last photo very interesting. I think it's appeal is to those of us who like to photograph abandoned places. A very very small percentage of those who take photos rather than your average tourist.

Would agree that these are not your average tourist photos -- and more interesting to the likes of us for it! ;)