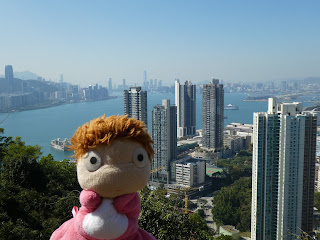 Puppet Ponyo on a cliff close to Victoria Harbour! :) 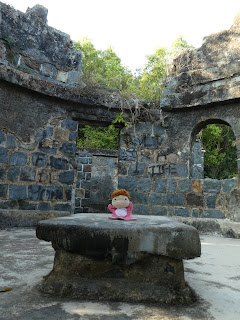 Puppet Ponyo posing inside the ruins of
the Qing Dynasty watchtower on Mau Wu Shan!
The day before Chinese New Year, many workers in Hong Kong get to leave work early.  And the way the air looked earlier today (i.e., clearer than it's been in recent days), it appears that many workers over on the other side of the Hong Kong-Mainland China border got to go on holiday already yesterday -- or even earlier than that!
Throw in pleasant temperatures that were in the high teens and early 20s on the Celsius scale and beautiful blue skies into the equation, and the result is that the likes of Puppet Ponyo decided that she simply had to spend some time outdoors today.  More specifically, this afternoon, the incorrigible one first took a scenic ferry ride from Sai Wan Ho on Hong Kong Island across Victoria Harbour to Sam Ka Tsuen, then went up and down a number of hills (including Devil's Peak and Black Hill) before taking a ride on a green mini bus and returning later in afternoon to Hong Kong Island on another ferry (this one plying the Kwun Tong to North Point route).
For the first two thirds or so, today's hike route went along Stage 3 of the Wilson Trail.  But instead of descending down to Ma Yau Tong from Black Hill, the (human) friend I was with and I opted to head over to Mau Wu Shan to look for a (ruined) stone watchtower thought to date back to the Qing Dynasty.
Although it's been accorded a Grade I heritage listing by the Hong Kong authorities, the location of the cylindrical observation post that some people have described as a "castle" is not marked on the relevant Hong Kong Countryside map -- unlike, say, the ruined redoubt atop Devil's Peak.  However, some nice souls have taken it upon themselves to indicate the way to it from Black Hill by doing such as writing out signs (in Chinese) for it on tree trunks at various points along the relevant trail and such.
In all honesty, there were times during the hike where I was unsure if we'd manage to get to the watchtower -- and this particularly so after the trail started to lead us several meters downhill.  As it turned out though, I found that I was mistaken in my assumption that -- like the redoubts at Devil's Peak and on the other side of Lei Yue Mun, on the site of what's now the Hong Kong Museum of Coastal Defence, this presumably military structure would be located at the top of a hill.  Instead, it lies on the side of Mau Wu Shan closest to Tseung Kwan O's town centre, not far from the Haven of Hope Hospital (where one can conveniently hop on a green minibus taking one back to urban Hong Kong)!
On a day when -- and trail on which -- we enjoyed some scenic vistas, I must say that the hike highlight for me (and possibly Puppet Ponyo too!) was the visit to the modest sized but still atmospheric historic structure on the side of Mau Wu Shan.  After all, it's not often that one gets to visit an over-hundred-year-old building in Hong Kong, ruined or otherwise; and this especially so if it's not a place of worship -- since these appear to be the type of structures that are most able to withstand the urges of those for whom pretty much nothing should stand in the way of money-making by way of replacing old buildings with new, taller ones with way higher square footage!
Posted by YTSL at 11:59 PM

Judging by this blog, you and Puppet Ponyo are prepared for an active Year of the Rooster. If this fanboy, born in the Year of the Fowl, may squawk away - it has been another strong year for entries in the WOS universe.

My favorite of your HK entries is "HK's Last Remaining Umbrella Repairman Is To Be Found in Sham Shui Po."...All of your hiking blogs were good, but two recent ones stand out: "High Points Aplenty on a Violet Hike" and "Off The Beaten Track in Lamma."...My favorite travel blog is the elemental volcanic scenery of "Owakudani."

My favorites of your movie reviews are "Call of Heroes" and "Sword Master" because they not only motivated me to re-watch old Shaw Brothers movies, but also show that current HK-Mainland collaborations can result in quality movies.

Thanks for introducing me to Funassyi on these pages a few months ago. The Pear literally blasted into my life dodging explosions, then entertained me in Macau with these mini-productions: preparations to bungee jump, getting a soothing massage and participating in a folk dance on the streets. This last one showed that Funassyi is more than just a bundle of hyperactive energy - but is also capable of graceful choreography.

Lastly, thank you for posting a photo of my dear friend Puppet Ponyo, in perhaps her proudest and most elated world traveler's pose in "Red Leaves and Pink Ponyo."

Kung hei fat choi to you too, and siu hau seong hoi as well!

Thanks much for letting me know of the blog posts you've enjoyed over the past year or so. In particular, I appreciate the vote for my umbrella repairman post since no one commented on it (before) and it didn't seem to attract that many readers.

Thanks too for your appreciation of Puppet Ponyo, and now Funassyi too. Speaking of the unofficial mascot of Funabashi: the following is one of my favorite dancing Pear videos:-
https://www.youtube.com/watch?v=PXE2Pv0fs8o