It's listed as being the joint 74th highest hill in Hong Kong along with nearby Jardine's Lookout on a Wikipedia list of the Big Lychee's mountains, peaks and hills.  But on the Hong Kong Island & Neighbouring Islands Countryside Series map that I carry with me when I go hiking on Hong Kong Island, Lamma, Po Toi and Tung Lung Chau, the highest of Violet Hill's three peaks is listed as being 436 meters high; one meter higher than Mount Butler as well as three meters higher than Jardine's Lookout.

As it so happens, Violet Hill also beats out both those Hong Kong Island hills as being my favorite hill to hike up on the island.  One big reason is that, because the Hong Kong Trail doesn't go up to its highest peak, that high point tends to be one which fewer people head over to -- and thus tends to be a pretty peaceful as well as pleasant place to hang out for a bit and enjoy the scenic views.  Another reason why I like hiking in the area is that, true to its name, violet flowers can be found on the hill in question.

In addition, I also like that because various trails connect in this neck of the woods, you can mix and match your routes.  At the same time though, I have to admit that I've still to actually do what many way fitter people do in one go: i.e., go up at least one of Violet Hill's three peaks, followed by both of The Twins!  Instead, my favorite hike in the area involves going up the two highest of Violet Hill's peaks from Wong Nai Chung Gap, then heading over to Tai Tam Road from Tsin Shui Wan Au along the banks of a couple of the Tai Tam Reservoirs... :) 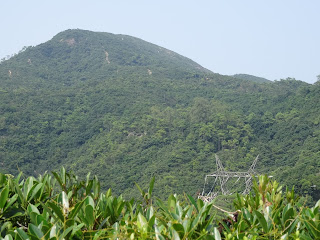 Yep, that's Violet Hill and the trail I like going up it! ;b 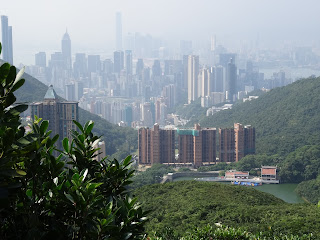 It can be rewarding to turn back every once in a while
and see how far one has already gone, and is from the city :) 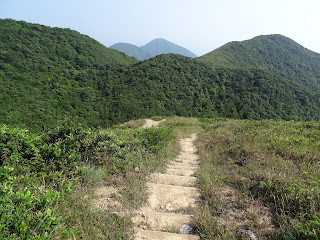 The Twins can be seen in the distance but it's best to focus
at this point on getting past Violet Hill itself :b 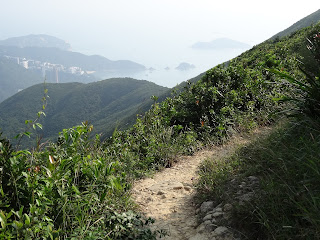 Hong Kong really is such a contrast of green countryside and
rugged trails on the one hand, and concrete jungle on the other! 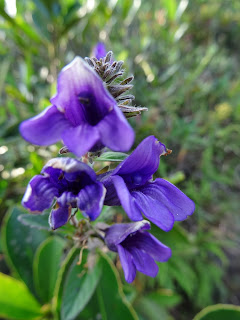 Some of the violet flowers that gives
Violet Hill its name 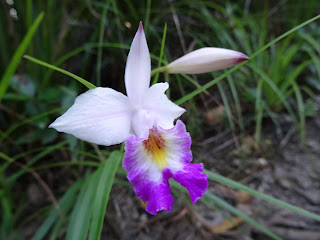 A less common flower found on Violet Hill this time around 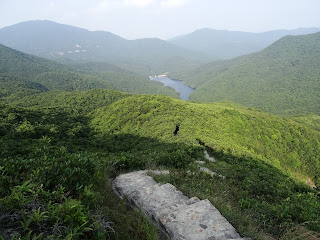 The kind of sight that gladdens my heart, and which not all that
many people realize can be found in the center of Hong Kong Island! 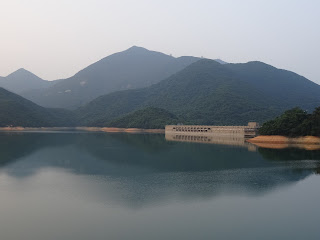 Near hike's end, the area around the Tai Tam Reservoirs
offer up many satisfying vistas too :)
Posted by YTSL at 6:11 PM

You've started the Western New Year with a bang by posting some outstanding entries, including this Violet Hill hike. You seem to have a near-reverence for nature's sights in the Violet Hill and Tai Tam area.

Sure pretty flowers. All of our mountain peak are snow cover...Our highest peak is Pyramid peak about 7,714
The one I see out my front window is roman nose it stands at 7, 260 and the peak out my slider is black 6.092
All in feet.
Coffee is on

I'm happy to learn that you're continuing to enjoy my blogging efforts. Re Violet Hill and Tai Tam: I don't just love the sights on offer in those areas but also the sounds (of birds, etc.), the feel of the breeze and wind, and the exercise hiking there offers up! :)

One feet = 0.3048 meters. So FYI, Violet Hill is a modest 1,430 feet high. So it's definitely a hill whereas the mountains around you sure do sound like mountains alright! ;)