"Here be dragons" is the phrase famously associated with unmapped areas of the world in days of yore, and which does appear in Latin on a 16th century copper globe.  Increasingly though, I think that Hong Kong is the place where dragons are to be found -- or, at least, dragon-themed place names such as Kowloon (taken from the Cantonese kau loong, meaning "nine dragons), the Lung Yeuk Tau ("Mountain of the Leaping Dragon") Heritage Trail, and the Leaping Dragon Walk which I went on one sunny and super high visibility afternoon (very unlike today's, with its torrential "black rain" and all!) not so long ago.

Leading from Siu Sai Wan up to the northern end of the Pottinger Peak Country Trail, one can cobble together a nice hiking route that covers the entirety of the paved path, part of that country trail and an unnamed trail that leads down to Hong Kong Island's Big Wave Bay.  While in the area, one might be tempted to detour along the approximately half kilometer long Cape Collinson Path to check out the lighthouse over at Cape Collinson.  If you do so though, go more for the sea views and critter spottings (including camera-shy squirrels!) than for the lighthouse itself -- which, disappointingly, one can't get all that close to courtesy of locked gates! ;S 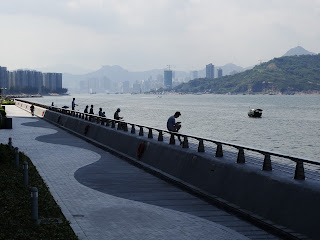 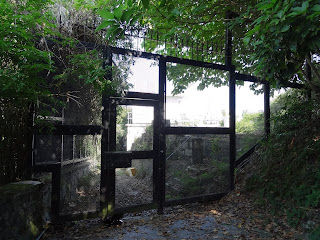 The closest I got to the Cape Collinson lighthouse :( 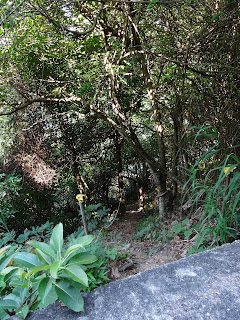 Maybe I'd have better luck if I went along this roped path
but I wasn't feeling daring enough to do so! ;S 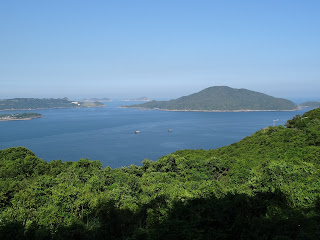 Back on the Leaping Dragon Walk, one eventually gets
sufficient elevation to get impressive views like this :) 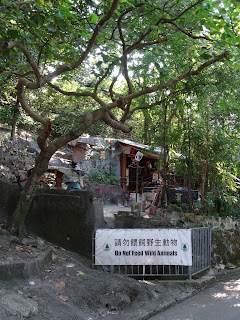 Just past the "Do Not Feed Wild Animals" banner is
a shrine where humans can get some tea to drink ;b 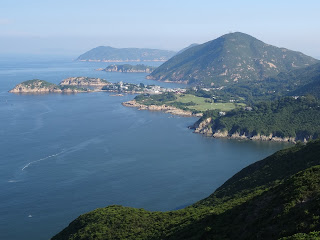 But it's the unnamed section of trail leading down to Big Wave Bay
that offered up the hike's most spectacular views to my mind! 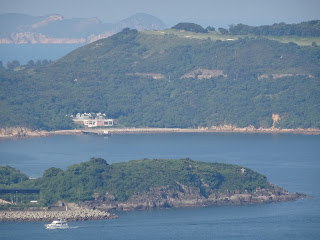 On a high visibility day, one can see Joss House Bay's Tai Miu
(which I last visited on Tin Hau's Birthday earlier this year)
from this eastern Hong Kong Island hiking trail! 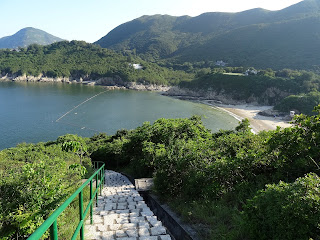 Looking southwards, and much closer to get to,
was Big Wave Bay, where I concluded the hike :)
Posted by YTSL at 11:59 PM