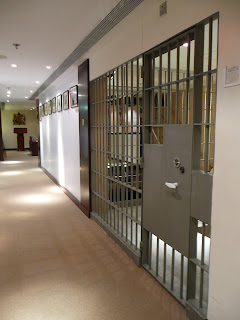 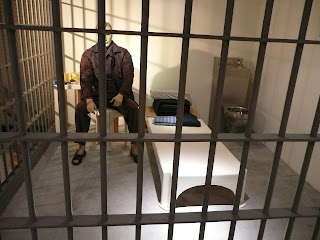 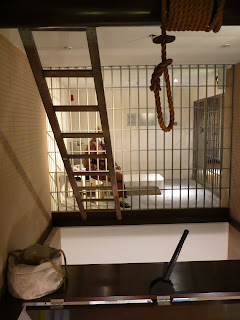 Some months ago, I wrote about how safe Hong Kong feels -- at night as well as during the day. In that entry, I posited a couple of reasons for that being the case. Upon finding out that Hong Kong has more prisons than one might think and one of the region's highest rates of imprisonment, one might also conclude that the threat of getting found out and locked up additionally acts as a strong crime deterrent to would-be offenders in the Big Lychee.

Once upon a time, captured criminals found themselves faced with terrible fates in Hong Kong. Anyone doubting that would do well with checking out the exhibits on display at one of the territory's close to thirty museological establishments: the Hong Kong Correctional Services Museum located close to the maximum security Stanley Prison in the southern section of Hong Kong Island.

As this Photo Hunt entry shows, the museum includes a cell diorama and mock up of the gallows (but for the record, capital punishment was abolished in Hong Kong in 1993 even while death penalties continue to be meted out in Mainland China). But you'd have to visit the institution yourself to see what were some of the punishments in store for convicts and condemned individuals that I consider quite a bit worse than spending time locked up in a cell or even getting a noose being put on your neck.

The Hong Kong Correctional Services folks also seek to emphasise by way of the museum that these days, the focus is on rehabilitation rather than punishment. For all that, however, a visit to that educational establishment got me convinced that being locked up is not a fate I'd like. (In stark contrast, there's a Japanese film called Doing Time which made prison in the Land of the Rising Sun actually seem... quite attractive! ;b )

Oh that is a quite lock in there. They really cannot get out of there. Happy weekend. Hope you visit mine.

I was invited to visit Singapore Prison and I won't want to be locked up in there no matter how humane I'll be treated.

Really good post for this week! Really made me think. :)

Wow, you really found great "LOCK" shots! Thanks for visiting mine. Have a wonderful weekend!

Now this is a post for the lock theme! Great job YTSL.
Happy weekend to you.

Very creative and informative take on this week's theme. I always learn so much about HK here.

When I first saw your photos,I was wondering how you got these photos at a prison, then I read further.

Interesting information and great shots for the theme. This is not a museum I would visit, so thanks for all the links too.
Mine is up, happy weekend :)

An instructive post. I am glad HK has retained such autonomy.

what a great perspective for the theme.

Aloha!
Lock of security - Very interesting. Thank you for sharing!

this is informative, ytsl, and creative, too!

this lock is not as appealing as mine's take for today's theme. :-)

Well, people *can* get out of prison... albeit after they serve their time! ;b

Guess you'll have to keep on staying on the right side of the law then! ;)

Thanks -- glad you feel that way about my post! :)

Thanks and happy weekend to you as well! :)

Glad you appear to get as much out of checking out my entries as I do yours! :)

One thing I'm really glad about: being allowed to take photos inside of that museum. (And yes, I definitely made sure to ask if it was okay to do so. Didn't want to break any rules there!!!)

"One country, two systems" at least until 2046 was the promise. For the surprising most part, it really does still hold!

"Crime and punishment" was what I thought of more... ;b

Thanks and yes, well... not meant to be appealing at all! :D

Very unique take on the theme. Amazing shots in the prison museum. I can see where visiting there would be a deterrent to crime.

It's lock all right. Happy weekend! :)

Great photos and wonderful piece of historical value too, in what you wrote.

Well, there certainly will be a few locks there! Interesting that there is a museum for the Correctional Services. The only other I've seen was a historic reconstruction, the old gaol in Dover and that, I believe, has closed.

Thanks for posting on what must be an interesting place to visit I would not want to be on the wrong side of those locks though! Happy weekend

Have a great weekend!
Anna

I agree, to be Locked up would be awful.

I must I read this post with great interest. Thanks for sharing.

Interesting post and a good take on the theme. I would have a lot of trouble being locked up.

So you think I got a lock on the theme? ;b

Thanks for the enthusiastically positive response! :)

Thanks -- for reading, looking and appreciating! :)

Same as what I wrote in response to Greyscale Territory's posted comments! ;b

The first prison museum I actually visited was at Alcatraz. Also, does the Tower of London count, I wonder? ;)

Yeah, that prison cell looks on the spartan side, doesn't it? ;b

You're welcome re the sharing. Thanks for visiting and reading. :)

Yeah, I think it's safe to say that the prospect of being locked up is not one many wish for/on themselves!

I didn't even think beyond locks, good take, though I prefer not to go there for a visit even as a visitor...

I love the history behind your posts, as well as the photos.

Cool, that reminds me of Alcatraz prison just off San Francisco!

This is one type of lock that we all would like to keep away from for sure! Nice history and nice post! Mine is up here.

Certainly that is a lock that I would NOT like to be behind!

Great information. Thanks for sharing.

Well, unlike you, I didn't have the creativity to make ordinary locks look beautiful. So... ;b

Funny that -- since Alcatraz Prison is the only other prison museum I've visited! :)

Thanks and same here!

Let's hope we do our utmost to stay on the right side of the law then! :b

You're welcome and thanks for taking the time and effort to take it in! :)

Your images are quite powerful for the theme, as well. I think my post begins the story and yours finishes it, eh?

Having checked out your entry, I definitely see what you mean about your post beginning a story and mine finishing it! :DDD