Funassyi infiltrated my dreams, and the Ponyos have multiplied in my reality! ;b 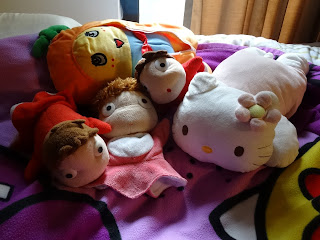 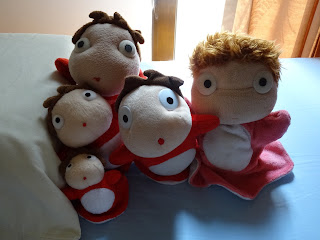 
While hiking along the Lo Fu Tau Country Trail a couple of weekends ago, the friend I was with asked me if I had any recurring dreams; whereupon I shared with him my having dreams in which I return to a house I used to live in in Philadelphia -- only in the dream, it's almost always falling apart! -- and also of my returning to the campus of my alma mater in Beloit, Wisconsin, only this time in happier conditions.  Another dream I regularly have -- which I didn't mention over the course of that conversation -- is more surreal and fantastical; seeing that it involves Earth, in particular the part of the world in which I'm residing (in the dream), being subject to an alien invasion!


As it so happens, I had that dream again last night.  This time though, there was a new twist which involved my being close to home and thus able to feel like I had a bit of time to pack my valuables into my backpack before making my way out of the city -- often, in the dream, by way of walking on the side of some train tracks.  And as unbelievable as it sounds, I actually considered packing two beloved plushies that I own in real life into that backpack -- and, in the end, left my "flying" Hello Kitty plushie on the bed in favor of leaving with Sleeping Bag Funassyi!


In all honesty: I'm not sure how to interpret much of the dream/nightmare.  But what I feel I do know is that there exists in it pretty concrete proof that Funassyi has come to have a deeply embedded place in my heart -- and it's true enough that I really do adore the Pear Fairy from Funabashi that I first became enamored with roughly one year ago this month!

At the same time though, I think I should point out that loving Funassyi doesn't mean that my love for Hello Kitty, Ponyo, etc. has gone away, been destroyed, etc.  In addition, even while it's true enough that my focus in recent months has been on accumulating Funassyi items, the number of Hello Kitty, Ponyo, etc. items that I own have not decreased in number.  Indeed, in the case of the Ponyos, their number has increased: this on account of a friend presenting me with two (more) Ponyo plushies on the eve of my latest birthday -- which turned out to be yet another fun as well as special occasion at Sake Bar Ginn... ;b
Posted by YTSL at 11:59 PM

Both this text and photos are a captivating glimpse into the world of your plushie collection. The top photo of some of your favorite plushies, has a wonderful domestic harmony about it, with Puppet Ponyo especially, looking her radiant best. The bottom photo must be close to a definitive Ponyo family portrait. This blog was a pleasure to read, and it leaves me with a warm feeling.

I must admit that when I was writing the blog post, I was thinking that you may be the only person who would find it interesting/worthy of comment! Thanks for your continued appreciation of Puppet Ponyo... and I hope that I will turn you at some point into a fan of Funassyi too! ;b

I wasn't familiar with Funassyi until I was introduced to it at your site. Plushies-mascots have a way of endearing themselves to me, slowly but surely, the way Ponyo and even Hello Kitty have. Funassyi is slowly drawing me into its orbit and I suspect it will find a place in my animist pantheon. Could it be that Funassyi may eventually become a travel companion of yours?

I'm happy for Puppet Ponyo to be my plushie travel companion of choice for a time. However, it may be worth pointing out that when I visited Penang in July, I did have a Funassyi t-shirt and Funassyi handkerchief in my luggage (along with Hello Kitty t-shirts and handkerchiefs)... ;b