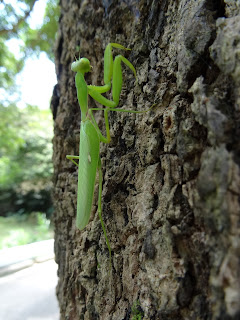 A praying mantis making its way up a tree 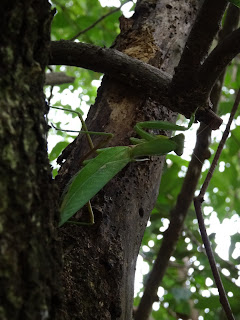 If memory serves me right, I never saw a praying mantis in the wild until I began hiking in Hong Kong.  Given the number of mantis spottings I've made in recent years, this can seem improbable.  And yet, I believe this to be true since I vividly remember my first ever spotting of these fascinating looking insects -- despite that event taking place close to seven years ago now!
While on a beach in Cheung Chau waiting for a few laggards, a fellow member of the hiking group I was with saw a praying mantis and managed to get it to hang out for a bit on his hand.  I remember being amazed by how tiny the creature was as well as struck by how alien looking it looked.  And I also marvelled at the man's having spotted the mantis; what with my critter spotting abilities having not been as good then as it has become, thanks to my getting loads of practice over the years.
I also have distinct memories of the first time I came across a praying mantis so large that it made me gasp: while at Kyoto's Fushimi Inari shrine, whose major claim to fame is its hundreds, if not thousands, of torii.  And it wasn't until last month, on the hike to Pui O post Chi Ma Wan beach clean-up, that I came across a mantis that big, if not bigger, in Hong Kong!
In addition to its size, this particular creature also astonished because it was the first time I had seen a praying mantis climbing a tree -- rather than, say, perched on a railing (and thus easy to spot) or some leaves (which allowed it to be better camouflaged).  And after all these years of never having ever spotted a mantis in the wild, never mind in tree-climbing action, imagine how mind-blowing it'd be if I were to spot the same mantis doing the same thing again one month later?
Granted that I can't say with certainty that this was the case.  Still, it seems super coincidental at the very least that while walking to Pui O post Chi Ma Wan beach-clean up yesterday, I'd once again set eyes on a(nother) large praying mantis climbing up a tree -- though admittedly a different one located several meters further along the road from that which was being scaled by the praying mantis I spotted last month!  And since these critters have a life span of 6 months up to a year, I'm not going to rule out the possibility that I've seen the same praying mantis in that particular part of Lantau... ;b
Posted by YTSL at 11:59 PM