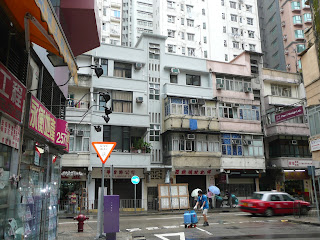 I lived in one of the tong lau in the above picture
for more than eight years... ;S

Earlier today, I moved from the place I called home for some eight years to an apartment not too far away.  And lest there be any doubt: yes, I'm still in Hong Kong -- and plan to be so for the foreseeable future!

Having decided to hire movers for the first time ever in my life, I also decided to pay extra for them to pack my things.  Scheduled to arrive at 9:30 this morning, they arrived at my doorstep 45 minutes earlier than expected; and even more amazingly proceeded to pack all my things and transport them to my new place by 10am!

Despite having spent much of the rest of the day unpacking with the help of good friend, I'm still not yet fully unpacked.  Something I really get to noticing whenever I move is how much stuff I feel like I own (even while my friend assured me that I don't seem to have as much stuff as many other people she knows).  And it's one reason why I dislike moving; even while it's true enough that I've probably moved around quite a bit more to date than many other folks.

For the record: I'm now in my fourth flat since moving to Hong Kong in May 2007.  And Hong Kong is the ninth different part of the world that I've lived in.  And yes, for all its political ills and such, I actually still do like the Big Lychee best of all the places I've spent a significant amount of time in thus far in my life.  Perhaps not coincidentally, as I've told more than one person over the years: I've gone and lived in other places in the world because of school or work; but Hong Kong is the only place that I decided I wanted to make a home in -- and then went about finding ways to earn a living and live here... :)
Posted by YTSL at 11:04 PM

Hi YTSL -- Congrats on the move! Sounds like it went really smoothly!

Thanks! Things have indeed gone pretty well thus far. Am hoping to get all the unpacking done by Monday. I'll let you know when the flat's ready for you to come over and visit... ;)

What are you planning to do with all the spare time you have now that you don't have to spend all your days flat-hunting?

I think I recognize where it is. That's one of the older areas in town.

Wet markets are nearby and within walking distance (there are three wet markets around). There is a spicy restaurant just round the corner. Those are the last few blocks of tong laus at that section of the street. Lot's of other restaurants of all kinds around too.

Free time? I guess I'll have that after I've unpacked but right now, it feels like it'll never get done (and so much so that I'm going to forego blogging again tonight)! ;(

Well done for recognizing where I used to live. For a few years now, I've been afraid that that block of tong lau would get torn down. As you've pointed out: there's not many of them left in the area... which I think is a great pity because I really do think they are great buildings if looked after properly.

The area shown in the photo used to be an amusement park (http://gwulo.com/luna-park) a bit after WW2, Hence the namesake of the street (月園街\Yuen Yuen Street) where you took the photo.

I often wonder whether it's not more expensive to pull down the buildings and erect new ones (which admittedly are taller and thus possess greater square footage) in their place. And when talking about costs: I wish people would consider environmental as well as just fiscal costs.

Thanks for the factoid re Yuen Yuen Street! It's hard to imagine that an amusement park was located there as these days, it's a rather run-down area with mundane businesses such as a sand supplier, a not very good laundry and an also not very good locksmith and clothes repairer (who I don't think is talented enough to be considered a tailor)!

A mere street name is what's left of many Hong Kong's past. There are many of these that most of us citizens aren't even aware of. We just took the street names for granted and might not think about if a street was named after something.

I have to admit, quite a few of them were named after opium traders back then.

Back to the neighbourhood of Yuen Yuen Street, do you know there was yet another entertainment establish similar to Luna Park in North Point? Do you known where is Ming Yuen Western Street? That establishment was much older (https://www.youtube.com/watch?v=Z2SIu10a-Zs). The youtube clip has some stills with synthesized Cantonese voice over talking about Ming Yuen (名園)。

On the other hand, there was the Lee Gardens in Causeway Bay.

Yes, I know where Ming Yuen Western Street is. Amazing that there were two entertainment establishments (amusement parks?) located so close to each other as that one was to the one at Yuen Yuen Street.

To be honest, I only really knew about Lai Chi Kok Amusement Park -- and that mainly only because it was featured in old Hong Kong movies, and I had read about Anita Mui Yim Fong having performed there as a child!

Ming Yuen was much older than Luna Park. For Lee Gardens I have to look it up. Could not recall when did Hysen Lee bought the site from Jardine Matheson.

The Tsuen Wan site had been redeveloped. I have to look it up before pin-pointing it on a map. It should be somewhere near the present day Panda Hotel though.

Got the following when I did a spot of Googling for Lee Garden:-
http://www.hysan.com.hk/about-us/history/

Hope you find that even 1/10th as interesting as the information you've supplied on this blog post thread -- thanks much, more than by the way!

No, I didn't know about the Kai Tak Amusement Park, etc. It's interesting to think that Hong Kong had so many amusement parks over the years. I know that it had far more cinemas back then than now. Seems like even while people worked hard and were generally less financially well off years ago, they still did allow themselves some fun -- and went about having fun in some interesting ways culturally.

I looked up a bit more and found a handful more information of these entertainment establishment. I have already excluded early prostitution and some of those amusement parks\theme parks (maybe without mechanical rides) are more wide spread on the island.

More later. Need sometime to go through the information.

BTW, the former Kai Tai Amusement Park might have the first roller-coster in town. On the other hand, there was a cinema within. Some movies and TV series were filmed inside Kai Tak Amusement Park back then.

The wiki entry has some external photo\movie clip links.

Wow, looks like this post and conversation's got you into research mood (and back down Memory Lane?)! ;b