75 Days: Life, Liberty and Happiness is disturbingly overly dramatic in its portrayal of the Umbrella Movement (film review) 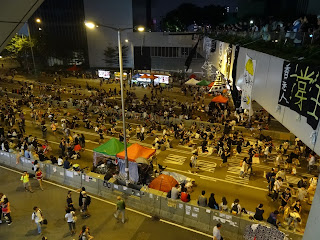 It's taken a while but a spate of documentaries on the Umbrella Movement which took place in the fall of 2014 here in Hong Kong have finally started to see the light of day.  Following such as the appearance of Umbrella Movement/Revolution music videos on Youtube and Umbrella Movement short films (a selection of which were screened at the Hong Kong Independent Film Festival last year) have been the likes of Evans Chan's thoughtful Raise the Umbrellas (which screened in "work of progress" form at the Asia Society last December along with his insightful 1992 political drama, To Liv(e)), and a number of entries in this year's recently concluded Chinese Documentary Festival.
Faced with a wealth of choices, I opted to check out a 130 minute documentary that I was hoping would have the broadest view of things on account of it having been made by a group of filmmakers rather than have just one or two directors as well as possess a less specialist focus -- unlike, say, Tim Cheung King Si's More than Conquerors, which looked at a group of Christians who took part in the Umbrella Movement, or Kanas Liu's 2 Van Drivers, about van drivers who volunteered to distribute and transport donated supplies during the Umbrella Movement, and even acted as first-aiders and drove the injured to hospitals when needed.

Especially in view of another film screened at the festival -- Chan Tze Koon's Yellowing -- having earned a Golden Horse nomination for best documentary and favorable reviews from the likes of David Bordwell, I think I made the wrong choice in going for 75 Days: Life, Liberty and Happiness (Extended Edition).  And in retrospect, I should have considered the possibility of the film containing, if not misrepresentations exactly, then a portrayal that doesn't jibe with many others' perspectives of the events that have radically changed Hong Kong's political landscape since, unlike the normative view of the 2014 Hong Kong protests having lasted 79 days, the documentary's makers appear to consider that it lasted just 75 days.

On a positive note: I like that 75 Days includes film footage shot during the night as well as day at Occupy Mongkok and Occupy Causeway Bay along with Occupy Admiralty. I also very much appreciate that members of Film 75 were on the ground and recording what was happening pretty much right from the start, and captured such as the protests that took place back on September 28th, 2014 and the disproportionately violent police response to them that culminated in an unprecedented 87 cannisters of tear gas having been fired into the crowd.

All in all, the strong impression I had is that members of Film 75 collectively spent hundreds, if not thousands, of hours at the Occupy sites and have a wealth of film footage of what took place, particularly over in Mongkok and Admiralty.  It's just such a pity that, when choosing what to include in 75 Days, they ended up disproportionately featuring dramatic, confrontational moments during the Umbrella Movement; and, in so doing, ended up giving an overly aggressive view of what actually were generally extremely peaceful, non-violent -- and polite and civilized even! -- protests.

During the post-screening discussion of the film, a member of the audience shared his dismay at precisely this and said that he wouldn't want 75 Days to be seen by his friends who hadn't been at the Occupy sites themselves because they may get the wrong idea of the Umbrella Movement upon doing so.  I totally agree with him about this; which is particularly sad in view of my (still) getting the sense that members of Film 75 actually are Umbrella Movement supporters themselves or, at the very least, actually wanted to present a balanced view of what the protests.

Here's the thing: I think the members of Film 75's wish to ensure that their work was interesting and dramatic inadvertently resulted in their favoring those moments they captured when people behaved violently and in other stupid ways that sometimes disturb and other times actually (just) amuse.  And even while a large proportion of the bad behavior shown was committed by individuals against the Umbrella Movement, I actually came away from viewing 75 Days with the fear that this film could easily be made use of by the Umbrella Movement's opponents and detractors.

Aaargghh! I missed this, but guess I didn't miss too much regarding this particular movie...

Did you manage to catch "Yellowing"? I wish I did...

Okay, then, if I hear of additional screenings of "Yellowing", I'll let you know -- and trust that you'll do the same if it's the other way around! :)