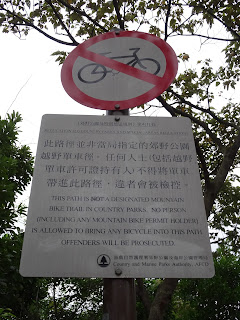 This sign's warning is pretty clear enough,
is it not? 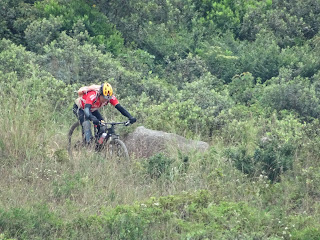 Then how come there were a number of mountain bikers
on the Lo Fu Tau Country Trail on Sunday? :S


As I was walking home this evening, I saw a man loosening his trousers as he walked towards me and then veering off to take a leak on the side of the road.  Needless to say, I was pretty shocked; this not least since this was the first time I saw a grown man doing this in Hong Kong (as opposed to, say Japan or England) -- though it's true enough that I've seen Mainland Chinese kids doing this in recent years.


I have to admit it: I immediately jumped to the conclusion that the grown man who had decided that the side of a road could be used as a toilet was Mainland Chinese rather than a Hong Konger.  And I will maintain that the chances of my being wrong in this assumption are on the slim side.


At the same time though, it's true enough that whereas a few years ago, there was a 99.999% chance of someone eating on the MTR being a Mainland Chinese visitor, these days, I see many a Hong Konger nonchalantly eating and/or drinking in the MTR too.  Also, it seems that many a Hong Konger as well as Mainlander doesn't see much wrong with littering the great outdoors with their trash (with the side of the Kowloon Hills closest to the high density housing estates of such as Wong Tai Sin and Tsz Wan Shan tendng to be strewn with more empty plastic bottles and tetrapak drink boxes than other parts of the Hong Kong countryside that are harder for "just anyone" get to).


All in all, I feel that in recent years, Hong Kongers have become less generally willing to be law-abiding and more inclined to casually disregard rules and regulations that they don't think are worth obeying.  Taking an admittedly fairly innocuous example: while hiking along a section of the Lo Fu Tau Country Trail last Sunday, I crossed paths with a group of around 10 mountain bikers barrelling down a pretty narrow part of what is officially only a hiking -- rather than shared mountain biking and hiking -- trail.


To be fair, those mountain bikers did slow down when they noticed the presence of the friend I was with and I.  And some of them were polite enough to thank us as we stood to the side to give them more space (and ensure that they wouldn't crash into us).  But while my friend was inclined to "let them have their fun", I must admit that I was not entirely happy to do so; this not least since I would have liked to have been able to have a greater peace of mind from not having to worry about mountain bikers crashing into me while I was hiking along the unpaved path.


After all, it's not like there aren't any designated mountain bike trails in Lantau and elsewhere; including on the Chi Ma Wan peninsula, where, ironically, I've never encountered a single mountain biker while out hiking along this scenic section of the Big Lychee.  Also, I have to say that I do see this kind of behavior and attitude as a worrying trend towards people becoming less and less willing to obey the law, including ones that actually are in place to encourage better public behavior and regard for the greater community.

More than incidentally, I do not see this behavioral trend as stemming from the Umbrella Movement and its attendant civil disobedience per se, the way that some people have alleged.  Rather, I see these rebellious tendencies as the result of Hong Kongers seeing Mainland Chinese acting for some years now in ways that are supposed to bring about fines, yet going away unpunished time and time again -- and consequently thinking, "If they are doing X and Y without being punished, so can and ought I!"

For my part, I don't think that two wrongs make a right.  Consequently, I have to admit that I feel saddened whenever I see anyone -- Mainlander, Hong Konger, etc. -- misbehaving  in Hong Kong since every time I do so, I feel like I'm living in a less and less civil society; one where people have fewer manners as well as care less about the greater community and society, and acting decently because it's just the proper thing to do.
Posted by YTSL at 11:59 PM

Such behaviour is common these days, it's happening even in Singapore with our strict rules. Probably because when foreigners do it and get away with it, the locals follow suit. They know the rules don't have to be followed :D

I wish people would follow those rules that make good sense even if they get to thinking the chances that they'd get punished for doing so are slim. But yes, I can see how easily bad apples can make other people more like them, even while wishing that it was the other way around!