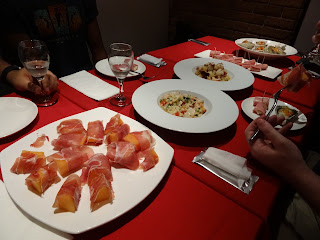 When these are just the starters, you know that
you're having a feast of a meal! ;b 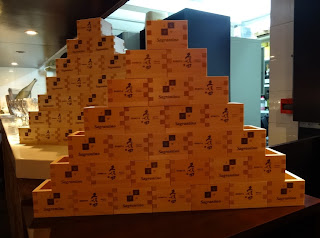 Add free flow quality sake to the mix and
I'm most definitely a happy camper! :)))


Whenever I've dined at Sagrantino, I get to ruing the lack of sake (more precisely, nihonshu) on the drinks menu.  Knowing that the Japanese-Italian (or is it Italian-Japanese) restaurant's owner-chef, Takashi Yasuda, is partial to the Japanese national tipple makes its absence from Sagrantino's drinks menu more notable.

So when given the chance, I asked him about this state of affairs -- and was told that this was because many of his customers prefer to bring their own bottles of sake over rather than opt for something from what would inevitably be a smaller selection if the restaurant were to offer this alcohol along with the wines, beer and other beverages on its drinks menu.


Although I like my sake, I have to admit to not being given to carting about my favorite sake to a(ny) restaurant.  So I had reconciled myself to drinking something else when I dined at Sagrantino, only to be told by Takashi himself that for the restaurant's 9th anniversary, he'd be hosting a special event that would feature free flow sake from the Asahi-Shuzo Sake Brewing Company that makes his favorite Kubota sake along with a range of his culinary concoctions.

Needless to say, I didn't need a second invitation to decide to attend!  And even though I ended up leaving this evening's party while it was still in fairly full swing, it wasn't for lack of enjoyment -- but, rather, because I was already super stuffed and satiated after two and a half hours of feasting and drinking (unlike some of the other guests who, in addition to enjoying what was on offer at Sagrantino, were planning to go to Sake Bar Ginn for after dinner drinks later on this Saturday night)!

With regards to the sake: there was a choice of two different junmai daiginjo, one junmai, one daiginjo, and one ginjo.  Those who know me will be able to predict my having eschewed the daiginjo and ginjo options and focusing instead on the rich tasting junmai and junmai daiginjo: both of which were very fine brews, but the more floral flagship Kubota Manjyu definitely edged it for me, and was the one that I found myself returning to throughout the evening.

As for the food: there was the classic combination of melon wrapped by prosciutto on offer and also raw oysters on the half shell (that I suspect came from Japan rather than Italy) among the starting options.  But as the night wore on, Takashi got more and more creative; coming up with delectable combinations such as mentaiko and mozarella topped with thin strips of seaweed, miso soybeans and mascarpone on slices of semi-firm tofu, and -- my favorite of the lot -- crackers topped with a divine pairing of pistachios and gorgonzola drizzled with honey!

In a week that also included an amazing dinner at Godenya, it can feel like I've been privy to a slice of foodie heaven in recent days.  The only downside to all this is the fear of what all this indulgence has done to my waistline, never mind my weight count and cholestorol levels!  Which is why I really feel that I need to do such as walk thousands of steps each day; and am glad to note that I actually did walk more than 20,000 steps today alone... ;b
Posted by YTSL at 11:59 PM