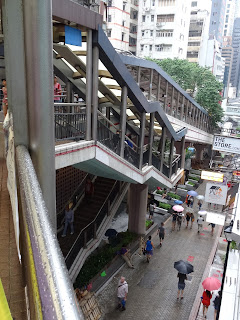 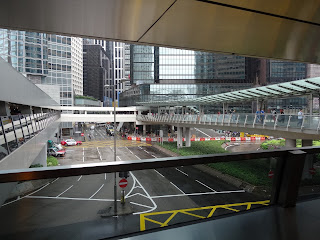 Just a small segment of the extensive footbridge system
that, on rainy days, one happily realizes has a covered top!

A visitor from the USA and I were talking recently about the 10,000 steps a day that health experts have recommended that we take.  Whereas he reckoned that mark is really difficult to attain when adhering to his regular routine back in America (which includes lots of time spent commuting in a car as well as at a desk at work), he figured that it'd be relatively easy for him to reach in Hong Kong, where he noticed that lots of people can be found walking about pretty much wherever he goes in the city.

No doubt about it: this is very much a walking city.  And even while I didn't have a car when I lived in the US as well as am car-less here in Hong Kong, I can state with certainty that I move around on foot a lot more here in the Big Lychee than I ever did in America.

This isn't on account of one not using much public transportation; indeed, I also use a lot more -- and more kinds of -- public transportation here in Hong Kong than I did when I lived in the big Eastern seaboard city of Philadelphia (and, for that matter, the small Midwestern town of Beloit).  Rather, I'm just out and about here for more hours of the day -- and, especially, night; due in no small part to pretty much all of urban Hong Kong feeling eminently safe to be in after dark, never mind in bright daylight.

Still, this is not to say that I always enjoy walking in Hong Kong.  Specifically, I dislike walking in streets that are so over-crowded that I feel I lack the space to move about at my preferred pace and with my preferred stride -- though I have to say that I feel this a lot less now that the (Mainland Chinese) visitor numbers to Hong Kong are noticeably below their pre-Umbrella Movement peak.

A friend who also generally likes to get by on foot's pet peeve is how it can seem like the foot traffic in Hong Kong often gets shunted over-ground as well as underground.  While I share her dislike of what are called subways in British English and underpasses in American English, I have to say that I don't tend to mind footbridges and other elevated walkways; this not least because I still can see interesting sights from them (unlike in the underground passages) -- and also because I like how they provide overhead cover from the not insignificant amount of rain that Hong Kong gets throughout much of the year!

Indeed, I'd go as far as to say that I'm a fan of the elevated walkways that allow me to walk from Admiralty through Central to Sheung Wan or up to the Mid-Levels without my feet touching the ground for all but just a few meters around the vicinity of the Court of Final Appeal Building and Statue Square.  In particular, I really appreciate the air-conditioned comfort of the sections that connect various commercial buildings in Central that are owned by Hong Kong Land during Hong Kong's many hot and humid months; this even though this particular route means my passing by some high-end designer clothing and accessory stores that I'd normally try to give a wide berth... ;b
Posted by YTSL at 11:57 PM

Urban walking fascinates me, especially reading this entry about your "elevated walking city." Getting a minimum of 10,000 steps daily, shouldn't be too difficult in HK on one's day off, but on work days, probably only dedicated walkers using time before and after work, could reach the 10,000.

A book, Cities Without Ground Hong Kong, by Adam Frampton and Clara Wong, illustrates how footbridges in HK "form an extensive network."

On work days, it may be difficult for some to get to 10,000 steps but I think many can easily get to 8,000 steps without too much effort if they go out for lunch (like many Hong Kong workers do, rather than eat at their desk, etc.) and walk up and down escalators in MTR stations, etc. More than incidentally, I was talking to the Sake Bar Ginn proprietor last night about how much we walk daily and she estimated that she averages around 12,000 steps on work days, mainly from walking around serving customers in her bar! ;O