Typhoon Haima came close enough to Hong Kong to shut down the city for the greater part of today! 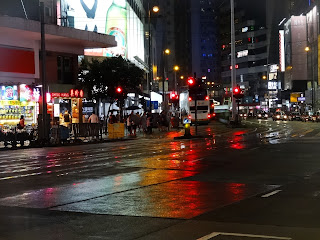 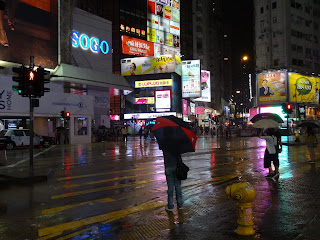 Noticeably less foot traffic too at the usually super busy
Hennessy Road pedestrian crossing in front of Sogo!
Over the course of just a few days, Hong Kong has seen warning signals raised for not one but two typhoons passing nearby.  Earlier this week, Typhoon Sarika caused typhoon signal number 3 to be raised -- and also brought about Black Rainstorm-class torrential downpours that caused several sections of the city to dramatically flood.  Still, it didn't cause the Big Lychee to shut down the way that Typhoon Haima did earlier today after it came close enough to Hong Kong to prompt typhoon signal number 8 to be issued at around 6.10am and stay in effect for close to 12 hours.
More than 740 flights scheduled to depart from or arrive at Hong Kong's Chek Lap Kok airport were cancelled and 156 trees were felled by the third typhoon to come near Hong Kong this month.  For my part, I got an inkling that Typhoon Haima was a more serious storm than Typhoon Sarika last night when I felt significantly stronger winds than usual blowing and the barometric pressure changed so dramatically that my back started aching and I actually came down with a migraine attack so bad that not only was my head thudding but the very act of sipping water -- to help me swallow some ibuprofen -- caused me to feel nauseous!
Although I woke up later than usual this morning, the sky was so dark that it looked like I had woken hours earlier than was actually the case.  Even before getting confirmation when I checked the Hong Kong Observatory website, I knew that the Typhoon Signal Number 8 had already been raised due to it being way quieter than usual outside as a result of such as the buses not running and the majority of stores on the road where I live not having opened for the day.
Although it didn't actually rain as hard for much of today as it had done on Wednesday afternoon, I opted against venturing out from my home until Typhoon Signal Number 8 had been downgraded into Typhoon Signal Number 3 and things felt like they had settled down somewhat.  Deciding to reward myself with a sushi dinner in Causeway Bay, I headed over there on a tram which had resumed service -- and found that normally super busy part of Hong Kong to be way less crowded (and consequently more peaceful) than usual.
While strolling about the area, I discovered that such as the Causeway Bay branches of the Apple Store and Sogo Department Store were closed despite Typhoon Signal Number 8 no longer being in effect.  On the other hand, many restaurants, bars, pharmacies and such had opened for business.  Indeed, I found out just this evening from a restaurant manager that branches of Senryo actually stay open during Typhoon Signal Number 8; what with the management perhaps anticipating that some lovers of sushi really won't let major typhoons get in the way of their craving for this popular Japanese food which definitely has many fans here in Hong Kong! ;b
Posted by YTSL at 11:25 PM

There been a few times they shut down our town, and to me it feel spooky.
Coffee is on

HI YTSL! It was really windy and rainy in Taipo and some trees fell next to our building!

Was it weird weather that caused your town to be shut down? And yes, it can feel rather eerie when things get super quiet here in urban Hong Kong!

I read your blog post about Typhoon Haima last night after I finished writing mine! You certainly saw more dramatic sights than me! About the most major damage I saw yesterday were lots of "dead" umbrellas dumped in trash cans... ;b

Traditionally local Chinese restaurants & Cinemas tend to stay open during Typhoon days. I remember going to Yum Cha with Mom & Dad when there was a No 10 Typhoon Signal decades ago. They would usually have the folding gates down but keep a small man door opened.

My days working at McYuck also included quite a few typhoon duty days back then. Except for not required to sweep the pedestrian on a typhoon day, everything in the restaurant is sort of normal and business as usual.

For this particular past typhoon day, I believe most Cinemas remained opened. I would have gone to a movie if I'm not on 7X24 duty this months. On the other hand lot's of Food chains are also opened (like the Maxim's Group).

You're right. McDonalds can be reliably counted on to stay open during Typhoon Signal Number 8. Also some cinema chains (e.g., the Brodway Circuit). Also, 7-Elevens. As for traditionally local Chinese restaurants: they varied in my area. Some chose to shutter their doors the way that other small local businesses did!