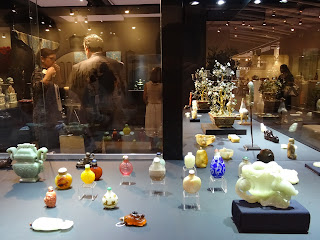 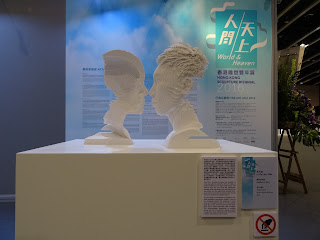 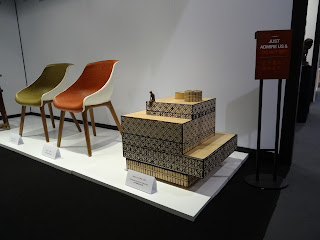 Would you mistake these works of art for actual furniture? ;b


I may be a film fan but I'm also a lover of art.  Consequently, it irritated me that the Hong Kong edition of Art Basel this year took place when the Hong Kong International Film Festival was also on and resulted in my effectively having to choose between the two mega cultural events.  And it's with no small amount of relief that I've discovered that there won't be a similar date clash in 2017; since next year's Art Basel has been scheduled to take place between March 23rd to 25th while the 2017 edition of the Hong Kong International Film Festival will run from April 11th to 25th.


Missing out on Art Basel this year also made me doubly determined to check out this year's Fine Art Asia.  And while some may scoff on account of this art fair -- which also takes place at the Hong Kong Convention and Exhibition Centre in Wan Chai -- being less prestigious and quite a bit smaller in size than Hong Kong's premier fine art event, I've had good enough experiences at previous editions of Fine Art Asia (including last year's) to consider it worth spending a few hours at.


As at Fine Art Asia 2015, I found the antique art works at the Ateliers A. Brugier booth to be particularly eye-catching; with the large lacquer screens from China and Japan being the kind of items that I actually think should be in museums for people to admire rather than displayed just in private homes for the enjoyment of a very lucky few.  Other museum quality objects on sale at this art fair this year included ancient bronzes from the late Shang (circa 1101-1046 BC) and Western Zhou (1027-771 BC) dynasties, a wooden Bodhisattva figurine from the Song dynasty (960-1279), and French Impressionist painter Claude Monet's beautiful Etrerat Needle at Low Tide.


Like at many conventional art museums, many of the items on exhibit at the art fair were displayed without much information beyond artist, title and date -- and sometimes not even that.  So I was most appreciative of the exhibitor (New York-based Kaikodo) which provided a surprising amount of descriptive details for each of the large Chinese scroll paintings on display in its booth, and also very much enjoyed the fair's Private Treasures: Experts Share their Personal View special exhibition featuring objects with special meaning for their owners, and their owners' tales of why this was so.


Often times at art events like these, the contemporary works are overshadowed by the older ones.  At this year's Fine Art Asia though, I was happy to see works by my favorite contemporary Chinese artist, "Invisible Man" Liu Bolin.  In addition, a number of pieces that were part of the World & Heaven special exhibition that's part of the 2016 Hong Kong Sculpture Biennial (as well as Fine Art Asia) left an impression on me.


Chief among these may well be Kevin Fung Lik Yan's Habitation II.  A metal sculpture resembling a tree, with a series of what looks like a cross between a bird house and human habitats installed at various levels, it looks to symbolize Hong Kongers' housing dreams; not least because the bulk of them were clustered at the top of the sculpture rather than at its base, the way that many Hong Kongers would prefer to live on high floors of buildings and up on The Peak (rather than the lower floors and levels)!

On a lighter note: there was a corner of the art fair which displayed some interesting but also pretty dubious looking "chairs" made completely out of glass, paper and other impractical materials.  A sign near them inveighed Fine Art Asia attendees to "JUST ADMIRE US & DO NOT SIT!"  I laughed out loud upon seeing it but at the same time, recalled having seen an attendee pick up an antique figurine at a booth at this same event and the shocked reaction of the booth attendant upon seeing him doing this.  So I guess that injunction cum warning installed near those "chairs" probably was actually needed after all! ;S
Posted by YTSL at 11:00 PM