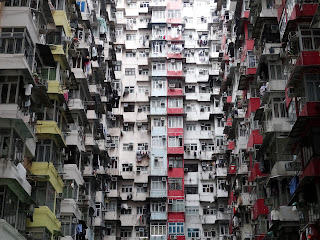 The Yick Fat Building has appeared in many movies but
it's a real life place rather than a made-for-movies set! :O 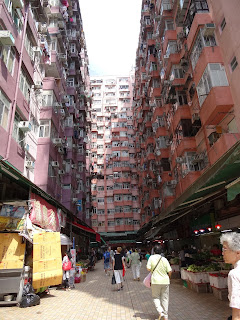 Perhaps more amazingly is that there are buildings
similar to it located in the vicinity!
Often times, when I tell people that I spent two years of my life in East Africa, they have visions of me living in a mud hut in the middle of nowhere and are kind of disappointed when I tell them that, actually, I lived in homes located in an urban space.  At the same time though, I consider some of them to be among the most "exotic" in which I have spent time in.
We're talking, after all, of such as a place in Zanzibar Stone Town whose directions for visitors to find it ran along the lines of "Go to the Anglican Cathedral and stand near the baobab tree nearby.  Look for the bicycle mechanic shop.  The house I'm living in is located behind it!".  Oh, and there was the fact that another of my Zanzibar Stone Town residences was located in the grounds of a graveyard and had bush babies living on the roof!
In addition, as far as physical amenities were concerned, all of the places where I lived in Zanzibar (I bounced around for a bit there and stayed in four different places over the course of nine months or so) didn't have hot water to bathe with, and three of them weren't equipped with fridges (which necessitated my having to go to the market pretty much daily, like most Zanzibaris!).  Still, living conditions weren't half as spartan as when I attended archaeological field school in the Four Corners region of the US my sophomore summer and spent the bulk of my nights sleeping in a tent!

Such experiences along with that of having been a graduate student, I reckon, have made me more able to tolerate poor housing conditions than many other folks.  Yet it also is the case that there are tons of places here in Hong Kong that I simply would never ever want to have to call home.  And I'm not just talking here about the cage homes and tiny subdivided flats that I consider myself immensely fortunate to only have been in courtesy of the Society for Community Organization (SOCO)'s Life in West Kowloon exhibition in a Sham Shui Po tong lau but also the actually pretty high priced microflats that Hong Kong developers seem more and more intent on building.
A few years back, Queen's Cube was criticized for having flats with listed gross floor space of 400 square feet that actually had only 275 square feet of "saleable" (or "usable") space -- and went on to inspire the production of a clever "King's Cube" parody video.  But its flats seem palatial now in comparison to those in Henderson Land's One Prestige (the smallest of which are just 163 square feet).  And the madness has continued with an announcement today that Swire -- which is widely considered to be the best housing developer in Hong Kong -- will be making available studio apartments that are just 142 square feet in size later this year!
Again, bear in mind that I am someone who has lived in housing that a fair few people would not feel comfortable in.  (In addition to the Zanzibari and Four Corners examples, I've also done such as lived in a group house with four other people in Philadelphia, and attended boarding school in England back in the days where the bulk of the money went to education rather than accomodation!)  And yet, I think that 163 and 142 square feet flats are a bridge too far; especially at their price -- which in the case of One Prestige was close to HK$4 million (~US$515,670) to purchase and in the case of Swire's Star Studios, is looking to cost HK$12,780 (~US$1,648) a month to rent! :O
Posted by YTSL at 8:19 PM