Click on the above image to see an enlarged version of this panoramic view! 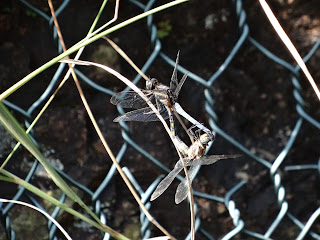 I guess it was just wishful thinking.  A couple of weeks ago, I blogged my feeling that the air was turning autumny.  Just this week, however, we had Hong Kong's hottest September day in half a century; thanks in part to Typhoon Megi (which also brought along high amounts of air pollution to this part of the world).  And although Typhoon Megi has moved away from this area (and, in fact, had not ventured much closer than around 800 kilometers from the Big Lychee),  the heat and humidity has remained; to the extent that I found myself perspiring quite a bit when just standing and waiting for two hiking buddies at the agreed upon meeting point this afternoon!

Undeterred by the weather forecast including the possibility of a few showers, we went ahead and trekked along Stage 7 of the Hong Kong Trail in reverse -- which meant our beginning the hike on the opposite side of the road at To Tei Wan from the trailhead for Dragon's Back, to the bemusement of the hoard of hikers heading for that (too) popular hiking trail.  And so much did we enjoy this afternoon's outing that we ended up extending our excursion by also venturing along the trail leading down to the base of Tai Tam Tuk Reservoir's impressively large main dam and along the western edge of Tai Tam Harbour.

Among the upsides of today's unseasonable weather conditions was that we were able to enjoy higher than usual visibility and skies that were brighter, more blue and just plain more beautiful than expected for this time of the year.  And while a few gray clouds could be spotted, they never did open up and rain down the precipitation that one of my hiking buddies said he'd actually welcome on account of the afternoon turning out to be so hot!

Granted that there were fewer critter spottings this afternoon than what I'd expect for a summer hike.  Still, the ones that we did catch sight of were pretty interesting; none more so than the pair of  dragonflies going at it which, while employing the standard position favored by members of their species, were unusual in that they actually kept on flying from spot to nearby spot even while... physically connected!  Maybe, as one of my friends joked, they were trying to move away from prying eyes and cameras; in which case I have to say that, sorry for them, they didn't succeed! ;b
Posted by YTSL at 11:59 PM