Only in Hong Kong: the Falun Gong edition! 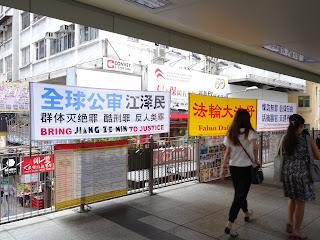 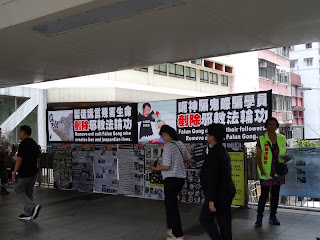 Anti-Falun Gong materials on display over on the
opposite side of the same Wan Chai pedestrian overpass!
"Only in Hong Kong."  This is a phrase one commonly hears being used to discuss something people think is amusing or unusual and, yes, particular to the Big Lychee.  And this was my exact thought when, while walking in Wan Chai earlier this week, I came across the sight of Falun Gong (aka Falun Dafa) banners denouncing former People's Republic of China president Jiang Zemin and extolling the goodness of the Chinese spiritual practice on one side of a busy pedestrian overpass and anti-Falun Gong banners and other materials erected on the opposite side of the same pedestrian overpass.
It's not just that Hong Kong is pretty much the only part of China where Falun Gong remains legal (along with protests and other expressions in favor of it).  But I also get the feeling that this is the only part of the world where sustained and concerted efforts have been made to counter the Falun Gong demonstrators in ways that seem particularly, well, Mainland Chinese (despite the anti-Falun Gong protestors supposedly being representatives of an organization with "Hong Kong" in its name).
When I first moved to Hong Kong, and for a couple or so years afterwards, there was a more or less permanent spot near the Sogo department store in Causeway Bay where Falun Gong members would stage demonstrations and protests against the movement's suppression by the Mainland Chinese authorities.  At some point, that place was taken over by an anti-Falun Gong group whose banners and such had written styles so similar to those of the Falun Gong that -- ironically probably more than intentionally -- made it so that if you didn't actually look closely, you wouldn't have realized that they actually were condemning, rather than supporting, the Falun Gong!
Meanwhile, other sites -- notably one by the Star Ferry Terminal in Tsim Sha Tsui, and this one in Wan Chai -- have pro- and anti-Falun Gong demonstrators staging their respective protests just a few feet away from one another.  And although both sides would appear to have good reason to detest each other, like one would expect of self-respecting Hong Kong protestors, they look to have managed to restrain themselves and not resort to violence to try to get their messages across thus far.
Although they used to include peace-shattering speechifying emanating from loudspeakers among their weapons of choice, both the Falun Gong demonstrators and counter-protesters seem content these days with standing around silently handing out leaflets for the most part.  Coupling this with their effectively having become regular features of the contemporary Hong Kong landscape, the result is that most locals passing by barely register their presence anymore.  And I have to admit that if I hadn't been walking with an American friend in that area that day, I wouldn't have given much thought to those protesters -- and most definitely would not have considered the scene noteworthy enough to photograph for a blog post! ;S
Posted by YTSL at 11:28 PM