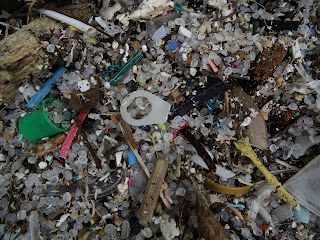 There are parts of the beach near Chi Ma Wan ferry pier
which look to have more plastic pellets than sand :( 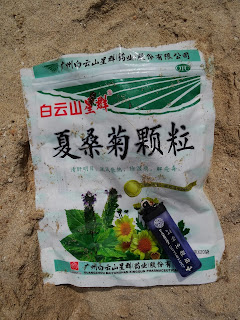 Made and used in Mainland China,
but washed ashore on a Hong Kong beach
It's the last Saturday of the month -- which means that it's beach clean-up time once more for the group whose leader has taken to calling us "Sustainability Heroes".  This time around, the portends were good from the start; what with our participant numbers being in the double digits, five of us being "returnees" (rather than people who turn up once but than never are seen again -- because the terrible state of the beach horrifies them and makes them want to give up, as opposed to galvanize them into further action!), and our also having the lowest number of "no shows" ever (at just one) for a Green Sustainable Living Hong Kong meetup event!

Adding to the agreeable mood was that the raindrops that fell as we got off the ferry from Mui Wo at Chi Ma Wan soon dried up, replaced by a largely sunny sky, cooling breezes and noticeably lower humidity than we've felt in ages!  Indeed, so fine were today's physical conditions that I felt okay with just having two water breaks rather than the at least twice more than I've felt a need to take on considerably hotter and more humid days.
All things considered, it's a good thing that our party was in an upbeat mood as we went about our task today as there was plenty of trash for us to pick up on the beach.  As we've come to expect, the vast majority of litter that we found was made of plastic.  Strangely enough though, there were a disproportionately high amount of plastic bottle caps to plastic bottles; something like 50 bottle caps to every one bottle!  Also unexpected was the significant number of plastic toys (among them, Lego blocks and also a mini Pikachu) along with shoes and amount of medical items (including inhalers as well as pill containers and such) that had collected in one particularly trash-filled corner of the beach.
Worst of all was what appeared to be millions of plastic pellets so plentiful as well as small that they could easily be mistaken for large grains of sand if you didn't bend down and really look closely at them.  They're the kind of plastic that one can easily imagine fish, other aquatic animals and birds swallowing in large quantities and dying as a result.  So it's actually surprising that, in contrast to on the occasion of some other beach clean-ups, I didn't see any dead fish strewn on the beach or floating in the nearby water this time around!
When talking to people about the trash that one finds on Hong Kong beaches, I've found that many of them mistakenly assume that it comes from folks littering at and on the beaches.  While I'm sure that this does sometimes happen, my beach clean-up experiences have made me utterly convinced that the bulk of the trash found on Hong Kong's beaches have washed ashore from the water and that a good deal of it comes from errant companies and corporations rather than individuals.
Also, as we once again saw today, quite a bit of this trash that pollutes Hong Kong beaches comes from across the Hong Kong-Mainland Chinese border.  So even while individuals -- and here I think it's worth noting that today's beach cleanup crew consisted of members who're originally from France, the USA, Malaysia and Mainland China as well as Hong Kong-born folks -- can and do make an effort to clean the beaches, governments really need to be working on this decreasing this pollution internationally as well as locally -- and acknowledging that it's not enough to make sure there's less trash within its own borders, sometimes by way of allowing it to go across those borders!
Posted by YTSL at 7:05 PM