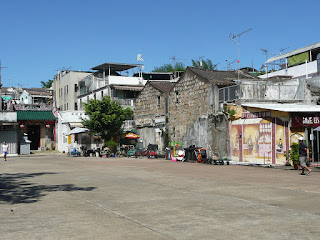 Not the most obvious place for a movie set -- but this section
of Peng Chau features in a number of Wong Ka Yan's scenes :)


Back in 2002, when I was still living in Philadelphia, I watched a Hong Kong film that I will forever associate with the outlying island of Cheung Chau.  A charming coming-of-age tale, Just One Look told a story that wove in references to 1970s Hong Kong and Taiwanese cinema, and starred four young up-and-coming talents, including Shine member Wong You Nam.

Thirteen years later, I'm now a resident of Hong Kong, and earlier this week watched a local movie set for the most part on the smaller and quieter outlying island of Peng Chau that got me thinking of that Riley Ip offering.  A romantic coming-of-age tale set mainly in 1992, Wong Ka Yan contains visual references to 1990s Hong Kong cinema, and has a now actually 32-year-old Wong You Nam playing -- surprisingly well, given the circumstances! -- a young Peng Chau resident who, on a rare excursion beyond his home island, falls in love with a sweet-faced ticket seller at a cinema after just one meeting.


The happy-go-lucky, guitar-playing younger brother of Wai Yin (Prudence Liew), the proprietor of open air food stall Ka On Yuen who bark is far worse than her bite, Chun Yin (Wong You Nam)'s life is forever changed after his fisherman buddy Paul (Tyson Chak) gives him a pair of cinema coupons and he makes use of one of them at a cinema where he meets a girl who appreciates his music.  But as quickly as she appeared in his life, she soon disappears from it.


Undaunted, Chun Yin launches a determined search for the lass, whose name he remembers as Wong Ka Yan, that involves such as making an on air appeal with the help of a radio DJ and going through the telephone directory that lists scores of people, male as well as female, with that name.  (Wong Ka Yan, we learn, is one of those names that is not only common but unisex -- and belong to people as varied as a male guitar instructor, a female secondary school student, a male detective and more than one housewife!)  Amazingly, the boy-on-a-mission even gets a few of the Wong Ka Yans he contacts over the course of his quixotic quest, including an initially hostile female (Karena Ng), to help him look for the Wong Ka Yan of his dreams!


Supposedly inspired by a true story, Wong Ka Yan is a modest movie which feels genuinely local, and comes across as having been conceived by true Hong Kong film fans.  One of the increasingly rare Hong Kong productions shot on location in identifiably local settings, its props include historically accurate movie posters and the kind of photos of celebrities treasured by their fans, its cast noticeably includes familiar faces from various eras of Hong Kong cinema (including 1990s character actor Vincent Wan and 1970s kungfu movie actor Jason Pai Piao), and it possesses characters who work in the kind of stand-alone cinema that, sadly, no longer are the norm in Hong Kong.


In addition, Wong Ka Yan looks to have made use of certain plot elements and narrative tropes associated with older, beloved Hong Kong movies to instill a sense of nostalgia and "deja vu all over again" in those of its viewers who are long time fans of Hong Kong cinema.  One potential benefit of this approach is that it can predispose those film fans to want to like this movie (for what it represents, not just based solely on its own content).  At the same time though, debutant director Benny Lau (who co-wrote the film's script with his wife, Petrina Wong) runs the risk of getting his maiden film inevitably compared to quality works which have injected themselves into the hearts of many viewers and sometimes even into the cultural fabric of Hong Kong itself.

In my review of Mabel Cheung's A Tale of Three Cities last month, I had expressed my wish that Hong Kong filmmakers would go back to concentrating on producing small-scale works that told personal stories and touched the heart.  The makers of Wong Ka Yan have attempted to do just that -- and for that, I sincerely applaud them.  The problem though is that, when viewed in the cold light of day, theirs is hardly the most polished of works -- with technical deficiencies including acting that can appear overly broad at times and plain amateurish in some instances.


Then there's the fact of the movie possessing characters whose ultra-romantic ways can come across to those with a less romantic disposition as the height of foolishness, even insanity.   But, then, that was the criticism made by my parents of Chungking Express, a film I love and know that I'm far from the only person out there who does!  And like with that 1994 Wong Kar Wai work, Wong Ka Yan has a song that can be heard more than once over the course of the film, and which one is likely to emerge from a viewing feeling, for better or worse, like one will never be able to get it out of one's head. ;b

Hi YTSL! I'm sorry to hear this is not as good as it could have been. I ran across the trailer last week and was charmed by the premise and promise of, like you said, a small-scale local film. At the very least, I'm sure I will enjoy it more than Lost in Hong Kong, which left me feeling rather cold in spite of its nostalgic nods to one of my favorite cities.

Well, at least "Wong Ka Yan" is watchable -- which is more than can be said of "Lazy Hazy Crazy" (whose review I just wrote up and posted). Well, at least Hong Kong movies are still being made and some of the filmmakers still trying, right? But it is indeed painful to compare the contemporary Hong Kong cinema to its early 1990s heyday -- to think that 1992 alone saw the release of gems such as "Police Story III: Super Cop", "Swordsman II", "Actress", "Dragon (Gate) Inn", "The Legendary La Rose Noir", "Naked Killer", "Girls Without Tomorrow", etc., etc.!

I'm sorry to hear that "Lost in Hong Kong" left you cold. I still would like to see it though, having enjoyed its makers' "Lost in Thailand".

I'm curious what you will think of "Lost in Hong Kong". I was enjoying it at first and then inexplicably lost interest when the characters started their journey of getting lost in Hong Kong. It could simply be that I've gradually developed an anti-China bias because of my fondness for Hong Kong (and also Taiwan). But the "Hong Kong" shown in the film just didn't resonate with the "Hong Kong" that I've come to know and love through local movies and my own visits. I'll take a film like "Dot 2 Dot" over "Lost in Hong Kong" any day.

I'll consider myself warned against having high expectations for "Lost in Hong Kong" -- and I'm glad to learn that you're also a fan of "Dot 2 Dot", my favorite Hong Kong film of last year. (And in general, like you, I'll take Hong Kong over mainland China any day!)