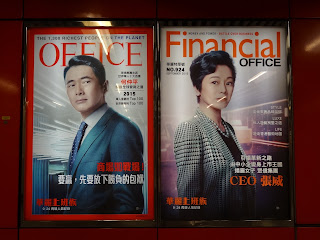 Cool advertising for Johnnie To's Office in the MTR


Twenty-five years after they last worked together on a film (1990 Chinese New Year comedy The Fun, The Luck and the Tycoon), Sylvia Chang and Chow Yun Fat appear once more in a movie directed by Johnnie To.  This time around, the lead actress also has scriptwriting credits -- with Office being her film adaptation of Design for Living, a hit play examining contemporary urban Chinese values which she co-produced as well as starred in and wrote.


The theatrical work which had Chang playing the CEO of a company preparing to be listed shortly during what turns out to be the global banking crisis linked to the collapse of Lehman Brothers clocked in at close to four hours in length when it first was performed in 2008 (in cities such as Shenzhen and Hong Kong).  With a total running time of 119 minutes, Office is a considerably shorter effort -- and there is indeed a sense that certain of its characters' and overall plot development suffer from it being an abbreviated product.


Admirers of their work also will surely conclude that Office would have been a better film if both Chang and Chow Yun Fat had had larger roles in it than they, in fact, do.  (The charismatic Chow's actually more of a guest star than anything else and Chang does not anchor the film like it'd be expected.)  Instead, the younger likes of Canto-pop mega star Eason Chan have more prominent parts to play -- and the character that it looks like the audience is supposed to identify with the most, or at least be most sympathetic towards, is that essayed by Wang Ziyi.

Office begins on Li Xiang (Wang) and Kat (Long Yueting)'s first day at Jones & Sunn, the billion dollar company whose chairman is the smooth talking Ho Chung Ping (Chow Yun Fat), a married man and father who also happens to be personally as well as professionally involved with its formidable CEO, Winnie Chang (Sylvia Chang).  Idealistic but also ambitious, the young man is clearly less sophisticated than Harvard graduate Kat but gains the attention of Winnie, who tells her main protege at the company, David (Eason Chan), that Li Xiang reminds her of him when he was younger.


Before too long, Li Xiang gets involved in company intrigues and power plays.  So too, in her own way, does Kat, who needs to hide her true identity as Ho's only child from her colleagues and intermediate bosses.  And although David seems more interested in playing the stock market than actually working while financial controller Sophie (Tang Wei) is often distracted by her boyfriend, who lives in another city, they too get caught in developments that see their lives spinning out of control.


Through it all, there is a strong sense that the movie's helmer has his hand(s) firmly on the rudder.  And as far as technical values are concerned, Office cannot be faulted.  In particular, William Chang and Alfred Yau's set designs (which are simultaneously stripped down and visually impressive) are top notch, and Cheng Siu Keung's stylish cinematography takes full advantage of this.


But for a film billed as a comedy, Office really isn't very funny -- and, in fact, comes across more as sad and tragic.  Worse, that which also happens to be a musical doesn't have any memorable songs.  Indeed, their lyrics don't seem particularly inspired and the tunes are plain forgettable.

Most unforgivable of all is that virtually all of this film's characters come across as soulless, with none of them coming across as people one wants to spend much time with in real life or watching on screen.  More than incidentally, the screening of the film I went to (just a little over a week after it had opened here in Hong Kong) had fewer than 10 attendees -- and one of them walked out of the cinema before the movie's half way mark.  When I reported this to a friend, she told me that another friend had said that if he had been to see Office alone (rather than with her and a third friend), he would have got up and left 30 minutes into the movie!